“Your Breathing Body” by Reginald A. Ray 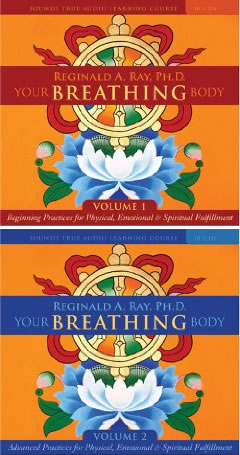 When Reginald Ray speaks of “touching enlightenment with the body”, he isn’t just saying that we can touch enlightenment with our bodies. What he really means is that there is no other way to do so. Sunada just finished her first pass through his 20-disc meditation CD series, Your Breathing Body, and gives it her ringing endorsement.

I first encountered Reginald Ray’s approach to meditation when I read his most recent book, Touching Enlightenment (excerpted elsewhere on this site), and attended one of his retreats on the same subject. As a yoga practitioner and a kinesthetic learner, I immediately took to it like a fish to water. And so I decided to invest in his CD series, Your Breathing Body – and I have to say I’m hooked.

In one sense, we could say that Ray’s perspective is unique. While many meditation teachers speak of working with the body, Ray goes so far as to say that the body is the only gateway through which we can find our most authentic core being and its ultimate connection to all of reality. But that doesn’t mean this is some minor, sideline approach. Ray argues that a somatic tradition has always been embedded in the core of the Buddha’s teachings, but somehow got lost in its translation to our Western culture. So this represents Ray’s efforts to bring meditation back to its intended roots.

Why the big emphasis on the body? Ray explains by taking us back to our prehistoric origins. When we were a hunter-gatherer species, we had to rely on our more intuitive, bodily cognitive functions in order to survive. Sensing predators in the wild, finding prey for the hunt, surviving the vagaries of nature – all this required that we lived rooted in our senses, keenly attuned to our environs. It was also a life in harmonious balance – our bodies and our sense of self were holistically embedded in our larger reality around us.

Ray argues that a somatic tradition has always been embedded in the core of the Buddha’s teachings, but somehow got lost in its translation to our Western culture.

But when we evolved into an agrarian species, our lifestyle changed to one of controlling, planning, and organizing – a more cerebral and disengaged approach to our world. This evolution has continued at a steady pace to the height of disembodiment that we find in our technological society today.

In our modern way of life, we mostly deal with our world through concepts and abstractions and much less, if at all, through experiencing it directly. In fact our society rewards those who are most adept at this kind of thinking and controlling. But of course, neither our bodies nor our world conform to our small-minded plans and desires. Such a view is bound to lead to suffering. And it’s this realization that gave rise to the Buddha’s teaching of the Four Noble Truths.

The path back to balance is through somatic awareness. And Ray suggests that our capacity for that awareness is still very much in our genetic makeup. Your Breathing Body is like a complete graduate program in reawakening our natural capacity for awareness. It’s a two-box set, each containing ten CDs. You can buy each box individually, or buy them together as a discounted pair. (If you buy the latter from the publisher, Sounds True, they throw in his Touching Enlightenment book as a bonus.)

In total it’s a goldmine of over 20 hours of in-depth teachings and guided meditations that go deeply into the subtleties of perceiving through the body. Many of the practices are based on Tibetan Yoga. If you’re a yoga practitioner, the emphasis on working with the breath and prana (a more subtle form of bodily energy based on the breath) will be familiar territory.

And Ray suggests that our capacity for somatic awareness is still very much in our genetic makeup.

I especially appreciated the very solid foundation and orderly progression of this series. Ray spends a lot of time teaching how to find one’s optimal posture, and then starts us on what are called the Ten Points and Earth Breathing Practices. These are in effect very detailed and extensive body scan and relaxation meditations.

But he leads us much further. It’s not just about bringing our awareness into our bodies. What happens is that by fully relaxing and continually letting go to our present experience, we start peeling away more layers of tension and holding. That holding, we begin to see, is not just physical. As our awareness goes more deeply inward, we find further emotional and psychological layers to release, such as doubt or fear.

When we peel everything away, what’s left is a core of spaciousness, freedom and openness – the place from which all our most pure and authentic impulses arise. This is how we begin to explore who we really are and what’s our unique place in this world. And isn’t this what we took up a spiritual practice for?

My approach in working with this series was to go slowly through all the discs over the period of several months. Ray says that some practices will resonate for us better than others, and that it’s good to follow our instincts to explore those more fully. So I spent longer on some discs than others. I’m now starting on a second pass, and I’m still gleaning insights from it. It’s a mark of an excellent teacher that Ray’s talks can be so clear and inspiring on the first pass, and still have more to give on repeated listening.

When we peel everything away, what’s left is a core of spaciousness, freedom and openness—the place from which all our most pure and authentic impulses arise.

What level meditator should you be to use this series? While he does start from the basics with an extensive talk and guided practice on posture, I don’t think it’s intended for complete beginners. I personally think that embracing these practices requires some degree of stillness and concentration off the bat.

But if you do have experience with breath-oriented/samatha meditations, dive right in! Even if you think you already know all about posture, I would encourage you to start from the beginning. He offers helpful perspectives that are often overlooked by other teachers. Overall, there’s enough depth and richness to keep you going for months, if not years.

For those of you who may not be familiar with Dr. Reginald Ray — he has been practicing for over 40 years and is a master teacher in the Tibetan lineage of Chögyam Trungpa. He is also an academic by training, and has been on the faculty of Naropa University since the beginning. He brings all that depth, knowledge, and clarity of thought to his teaching. I find him a great model of what someone well-grounded in his body should be: he has a warm, inviting, and down-to-earth way of speaking that makes you feel like he’s sitting right there talking to you personally.

So as you’ve probably gathered by now, I found Your Breathing Body to be excellent all around. It’s not only brought more depth and focus to my meditation practice, it’s helped me gain a perspective on my life that I’m sure will continue to unfold with discoveries well into the future. I highly recommend it.

Sunada Takagi
Sunada Takagi is on a mission to help people transform their lives through mindfulness. Her work includes leading classes in Mindfulness-Based Stress Reduction in the Boston area, and coaching individual clients from anywhere in the world via videoconference or phone. Read more at her site, Mindful Purpose Coaching. Sunada also teaches and leads retreats at the Boston Triratna Buddhist Sangha and Aryaloka Buddhist Center. Sunada was ordained into the Triratna Buddhist Order in 2004. This is where she received her name, which means "beautiful, excellent sounding." You can follow her at her Mindful Living Blog as well as on Facebook.
body awareness, body scan, the body, yoga