“Thought is gazing onto the face of life, and reading what can be read.” 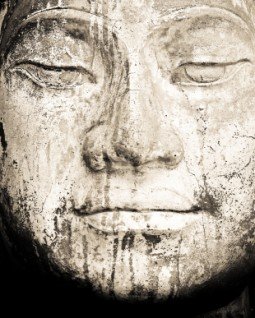 At the climax of the 2001 movie Vanilla Sky, Tom Cruise’s character, playboy David Aames, comes to realize that he’s been in suspended animation for 150 years and is trapped in a dream. He makes this discovery on top of an improbably tall building, apparently miles high, with the guidance of Edmund Ventura, a “Support Technician” who is trying to guide him back to waking reality.

Before he entered suspended animation, David had made the decision to awaken from this dream by facing his fear of heights. In order to wake up, he must now leap from the top of the building. Also on the rooftop is someone who has been a father figure to David, a warm, avuncular psychologist called McCabe, who has previously been helping him to figure out why he apparently murdered a lover. McCabe not only believes that what David is experiencing is real, he believes that he himself is real. And he tries to dissuade David from taking his all-too-literal leap of faith:

MCCABE. David, don’t listen to him. You were right … It’s a setup! You can’t trust him.

VENTURA. Don’t feel bad for him, David. This winning man is your creation. It’s in his nature to fight for his existence, but he’s not real.

Similarly, our fictional delusions don’t believe that they are delusions. And they don’t want us to know that they are delusions. If we wake up they die. They have a life of their own and they don’t want to lose that life. It’s in their nature to fight for their existence. To take a less poetic view, once certain patterns of thought have been established in the brain, it can be hard to change them. Just as a river, having carved itself a deep gorge, is trapped flowing in a particular direction, so our thoughts, the more entrenched they are, tend to course in familiar patterns.

Many spiritual teachers in the past have suggested that our delusions act in a way that protect themselves, so that a self-sustaining pattern of delusion is perpetuated in our minds. This is what we call the ego. The ego — our sense of a permanent, independent selfhood, doesn’t want us to wake up. It resists change. We think we’re permanent and separate. Some chance event reminds us we’re not and we feel alive again. Then we start to forget, and retreat into our sense of separateness once again, believing that that’s where happiness lies and that an awareness of impermanence is what leads to unhappiness.

But these delusions, these distorted perceptions, although deep-rooted and resistant to change are not un-doable. Like David Aames we need to wake up from our delusions. And one important means for waking up is reflection. To reflect is to examine our experience closely, to scrutinize our lives, ourselves, and our world, and to let reality collide, sometimes violently, with our assumptions. We tend to think of thoughts as being “the problem” because our thinking not only causes us pain much of the time, but also because much of our thinking is imbued with delusion: McCabe telling us not to wake up. But thought can also be a powerful tool for undoing delusion.

Where our assumptions are not in accord with how things actually are — for example where we to some extent believe we are separate and permanent when we are actually interconnected and ever-changing — there will be conflict. In reflecting, we consciously bring about conflict. And we keep doing this over and over, bringing our delusions up against reality, until something gives.

Reflection is not a mere intellectual activity. It’s not just a parade of words running through the mind. We rarely reflect when we read, for example, because all that’s happening is that words are crawling, ticker-tape fashion, over the mind’s surface. Reflection is not even the act of “thinking things through,” making connections between ideas. Reflection is an activity that involves imagination and emotion as well.

DH Lawrence expressed in a poem called “Thought” what reflection consists of:

When we reflect we turn ideas into felt experiences and images. When we reflect we see how our words and images affect how we feel. We bring new ideas up against existing ones and honestly observe the honest collision of contradictions. Reflection involves an almost ruthless degree of self-examination, a scrutiny of the mind and heart. It involves, like Aames, taking a running jump from what is known and a willingness to leave behind the familiar and safe (that which shores up the ego), even if this leaves us with the terrifying feeling that we’re plummeting through space. But it can also be exhilarating and deeply rewarding as we make new discoveries, and as we rearrange our inner world, letting got of stale and tired viewpoints and embracing new ways of seeing.

What criteria can we use in order to help us know whether our inner voices are those of a McCabe, seductively trying to keep us within the dream; or of a Ventura, who leads us to awakening? The Buddha’s advice was to use reflection. We need to ask ourselves which of our thoughts lead us toward to love rather than hatred; to being unfettered, not to being fettered; to simplicity, rather than to accumulating needless possessions; to modesty, not to self-inflation; to contentment, rather than discontent; to energy and engagement rather than to laziness. Gazing into the face of our lives, we can intuit a sense of which thoughts, words, and actions predispose to waking up rather than to remaining in a dream.

I really enjoyed the article and the poem.
For me life has recently become a process of recognising conditioned patterns, re-evaluating, and trying then to ‘let go’.
This implies a bit of vigilence though one can increasingly develop
a mental habit to operate.
Best wishes for the New Year