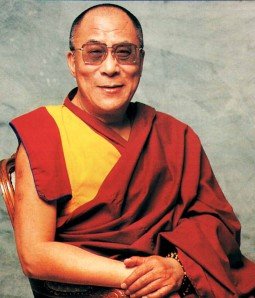 While it’s quite clear that others may benefit from our compassionate activity, the second part of His Holiness’s observation flies in the face of an assumption that is, for most of us, extremely deep-rooted: that is, the assumption that my individual welfare is best served if I primarily focus on my interests.

But recent scientific research on happiness and brain function suggests that we do help ourselves — by becoming happier — when we help others.

Time magazine recently named Professor Davidson of the University of Wisconsin, Madison, as one of the world’s 100 most influential thinkers. For years Davidson has been researching happiness, sometimes studying Buddhist monks in his lab, the Brain Imaging Laboratory, to examine how feelings of wellbeing correlate with activity in the brain.

In experiments run by Davidson and published in the Proceedings of the National Academy of Sciences, researchers studied the brain functions of experienced meditators. Each of the practitioners – six were Buddhist monks and two were lay people – had completed over 10,000 (and up to 50,000) hours of meditation, which is about the same amount of time it takes to become expert in a musical instrument.

These experienced meditators were compared with a group of 10 students who had undertaken a week of meditative training involving 45 minutes of practice a day.

Davidson’s principal tool for examining the meditators was functional magnetic resonance imaging (fMRI) scans, which reveal in real time which parts of the brain are most active. In earlier experiments Davidson had shown that fMRI can image where different emotional states take place in the brain. When people experience negative states such as anxiety or depression, brain areas that are most active are the amygdala and the right prefrontal cortex. When people experience positive emotions — happiness, love, confidence, etc — activity in the left prefrontal cortex is heightened. So remember: left is positive, right is negative.

In the more recent study, brain activity was studied both when the meditators’ brains were in a neutral state and while they cultivated unconditional loving-kindness (metta) and compassion. For the beginners there were only minor changes in brain activity between the neutral state and the meditation on lovingkindness, but for the experienced meditators there were massive changes — the degree of change being correlated with the number of hours of meditation each individual had done.

When the experienced meditators generated strong feelings of compassion there was a strong increase in activity in the left (or positive) side of the prefrontal cortex and a decrease in activity on the right (or negative) side. Developing compassion, then, results in the same kinds of brain activity that are shown when someone is in an particularly strong state of wellbeing and happiness. Meditators of course have long known experientially that feelings of love and compassion are accompanied by feelings of happiness, wellbeing, and even of bliss, but in scientific circles these subjective observations have to be backed up by measurements before they can be trusted as reliable data.

But why does compassion make us happy?

First is “diversion.” As His Holiness wrote in Ethics for the New Millennium, “When we worry less about ourselves, the experience of our own suffering is less intense.” Taking our focus away from what’s wrong in our lives helps us to be less self-obsessed. Compassion therefore diverts our attention away from problems which, when focused upon, loom large in our minds. Compassion in effect displaces negative emotions from the mind because we can only focus on one primary emotional state at a time.

Second, concern for others reminds us that we are not alone with our problems, and that others have even greater difficulties. From time to time in our lives we’ll be struggling with our normal quotient of suffering — worrying about paying bills, bickering over some disagreement, for example — when we encounter real suffering, such as bereavement or a serious accident. At such times we realize that we’ve been giving undue attention to problems that are, in reality, not such a big deal. So compassion helps us to put our own difficulties into perspective.

But third, the very act of connecting with others in a compassionate way enhances our lives in a very positive way. We are at heart social beings, and we cannot be truly happy unless we establish positive connections with others. Compassion and love give our lives a sense of meaning and fulfillment, and compassion is inherently pleasurable and rewarding. When we are caught up in our own anxieties and longings we are not fully able to connect with others and so our experience is impoverished. Compassion is therefore enriching.

This doesn’t of course mean that we should neglect ourselves and be concerned only with others. Compassion for others is ideally an extension of a healthy self-cherishing attitude in which we take our own needs seriously. In Buddhist practice compassion is developed for all beings, including ourselves, and in fact in meditations such as the metta bhavana (development of lovingkindness) and karuna bhavana (development of compassion) we begin by cultivating love towards ourselves. Ultimately, however, the best hope we have for attaining happiness ourselves is to pay more attention to the wellbeing of others.

Finally, for anyone daunted by the thought of 10,000 hours of meditation (that’s three hours a day for nine years, in case you’re wondering) remember that even those who had been meditating for 45 minutes a day for only a week showed greater happiness and even improved immune function. That’s a big reward for a modest effort.

Bodhipaksa is the founder of Wildmind.