Emily Dickinson: “The brain is wider than the sky…” 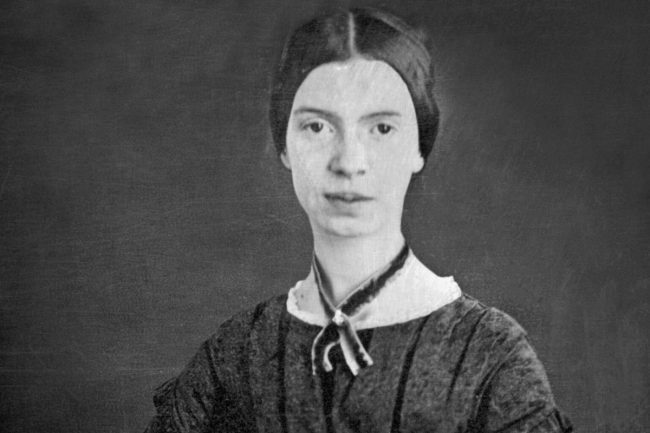 The brain is wider than the sky,
For, put them side by side,
The one the other will include
With ease, and you beside.
— Emily Dickinson

Dickinson’s poem, “The Brain is Wider Than the Sky” suggests that because the brain contains the perception of the sky (and more besides) it must in some sense be larger than the sky. This might seem like no more than an interesting thought — the kind of thing you momentarily appreciate as a quote on Facebook before forwarding it to your friends and moving on to the next cute cat video.

But this is the kind of thing that becomes very profound when you choose to sit with it in meditation. I started to experiment with a practice strikingly similar to Dickinson’s verse back in the 1990s when I lived in the city center of Glasgow, in Scotland. I lived on a busy shopping street in a tenement building that had a bar and a restaurant on the ground floor. Being four floors up did little to remove us from the noise. There was a constant roar from cars, buses, and delivery vehicles, the sounds of conversations and (especially at night as the bars came out) fights. Passing airplanes and the sounds of emergency vehicle sirens weren’t rare, either.

At first this noise used to interfere with my meditation, but gradually it became my meditation. I learned that it was fruitless to try to push these sounds away, and that instead it was best to notice them as sensations, just like any other sensation. The noise of traffic was really no different from the movements of my breathing; it was all just sensory data. The noise was only a problem when I tried to fight with it.

What I did was simply to attend to whatever sounds were around me. Instead of trying to push them away I allowed them to be there. They became, along with the breathing or the act of well-wishing, my object of attention in meditation.

The result of doing this was a sense of expansiveness. The sounds that reached my ears came from a vast expanse around me. In fact, including passing aircraft, my sphere of attention might be miles in diameter. It felt that my mind was expanding to fill the space around me. It no longer seemed that mind my was a thing inside my head, receiving signals that traveled to it along nerves, but that my awareness was a vast space in which the phenomena it detected arose. My mind (and therefore my brain) encompassed the sky.

This changed my whole meditation practice. For one thing, I did a lot less thinking than I usually did. My mind spontaneously became much quieter. For another thing, when thoughts did arise they were just one very small part of my field of attention. They were less likely to catch my attention, and simply rose and passed away, without my getting caught up in them.

This was probably the single most revolutionary development in my meditation practice — one that provided an approach I’m still working within.

Later in the poem Dickinson says “The brain is just the weight of God.” This very bold comparison provides another connection with meditation. The expansiveness that I’ve been talking about is very helpful in meditations to do with cultivating kindness and compassion. These forms of meditation are known in Buddhism as the “brahma viharas” — literally “the abode of God.” Our narrow sense of self begins to break down, and we realize that the wellbeing of others is just as important as our own. Developing a sense of spacious awareness in meditation makes it easier for an expansive sense of care and concern for all beings to arise.

So I’d suggest that you experiment with expansiveness in your own meditation practice. It’s not hard. After setting up your posture, first, just allow your eyes to relax behind your closed eyelids. Then become aware of the space — and any sounds it contains — in front, behind, to the sides, and above and below you. Let your mind rest into that sense of spacious awareness. And then see where it takes you.

Bodhipaksa
Bodhipaksa has been meditating since 1982 and teaching since around 1989. He is a Buddhist practitioner and teacher, a member of the Triratna Buddhist Order, and a published author. He launched the Wildmind website on November 11, 2000. Bodhipaksa has published many guided meditation CDs, guided meditation MP3s, and books. He teaches in various meditation centers around the world. He is supported by donations from members of the Wildmind community. If you're interested in becoming a supporter and in getting access to more of Bodhipaksa's teachings, please click here to learn more about his meditation initiative.
acceptance, brahma viharas, mindfulness, mindfulness in daily life, noise, spaciousness