Publilius Syrus, “To do two things at once is to do neither” 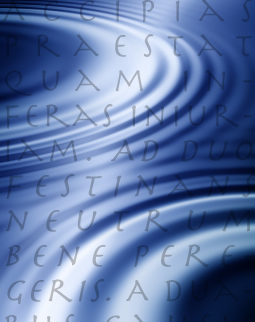 The other day I read about a family of six who were wiped out when a truck-driver plowed into their vehicle. He’d allegedly been driving and attempting to look at a laptop screen at the same time.

To do two things at once is to do neither (Publilius Syrus, an Iraqi enslaved by the Romans. Flourished first century BCE.)

Not all multitasking is that catastrophic, but nevertheless attempting to juggle too many things in a short space of time is causing us stress, reducing our productivity, and making it harder to maintain focus when we need to.

What happens in the long term to an economy built on the labor of information workers when those workers are too distracted to think? Well, perhaps that might be considerably more of a catastrophe than a single family being killed — no matter how tragic an event that was.

Multitasking is actually a misnomer. Your brain hasn’t evolved to deal with consciously processing multiple streams of data, such as listening to someone talk on the phone while you check your email and try also to keep one ear open for tidbits of an interesting conversation nearby. Modern computers may have been designed to do this, but our brains evolved to live in a simpler world. So we can’t genuinely multitask. What we call multitasking is actually a process of switching attention rapidly among a number of different activities.

The problem with multitasking is that although it may give the illusion of efficiency, it’s actually a very bad way to use the brain’s resources. It takes time, when switching from one task to another, to let go of one task, move your attention to the new one, and to resume your train of thought once again.

Imagine you’re doing some painting at the top of a stepladder and the phone keeps ringing (one of those old-fashioned phones with a wire, not the cordless variety). Every time the phone rings you put down your paintbrush, descend the ladder, answer the phone, write down a message or have a conversation, go up the ladder again, pick up your brush, and then resume your task. And this happens every three minutes. How much painting would you get done?

Every three minutes is, by some accounts, how often the average office worker gets interrupted.

Every three minutes is, by some accounts, how often the average office worker gets interrupted, by a phone call, an incoming email, a passing colleague, or some other task that pops into the mind. And that process of stopping one task, moving to another, and switching back all takes time and energy in the brain.

Confirming this finding is an experiment where subjects were asked either to check their email and then write a report — the tasks performed sequentially — or to do both tasks at the same time. The multitaskers took one and a half times as long in total than those people who did one task and then another.

But not only is multitasking bad for our efficiency, it’s been implicated in reducing our ability to apply sustained focus with our attention. Psychiatrists Edward Hallowell and John Ratey of Harvard say that multitasking can lead to “pseudo-Attention Deficit Disorder,” where we constantly seek new information but have trouble concentrating on its content. We end up restlessly seeking new stimuli, and unable to focus on it, in an information-worker’s version of the myth of the “hungry ghost.”

So what can we do to help avoid pseudo-ADD and multitasking-induced loss of productivity?

Multitaskers took one and a half times as long in total than those people who did one task and then another.

1. Switch off contact applications except for the one you’re working on.
Right at this very moment I’m writing an article on multitasking. Wouldn’t you love to know that I’m also checking my email, my Twitter updates, my IM, and stopping now and then to answer my phone and scan interesting web articles. Sorry to disappoint, but I’m not. My email and other contact programs are closed. My cell-phone is in another room. I’ll deal with any messages later.

When you’re dealing with email, deal with email. Let your voicemail pick up your phone calls. If dealing with your email requires you to look up an article or check your calendar, then by all means do so. But avoid unnecessary input.

2. Use simplifying tools
Some computer programs are hideously cluttered, with the toolbars on Microsoft programs being particularly overwhelming. And how many of those buttons do you ever use anyway? Do you even know what they do? I’ve reduced my toolbars in Word to just a few essentials, while for many common functions I simply use keyboard shortcuts, which in themselves reduce multitasking because they don’t require us to move from one kind of activity (typing) to another (selecting menus). The reduction in visual clutter helps me maintain focus.

It’s also helpful to write first and then format later. Trying to fiddle with formatting at the same time as writing is like trying to tidy the inside of your car while you’re driving it.

You can go further. For writing I use a program called “WriteRoom,” which has no menus and whose interface looks like an early 1980’s PC – simple green text on a black background (although the colors can be customized. There’s nothing there to distract me.

If you have a Mac or a large monitor, the profusion of applications on the screen can induce clutter-fatigue. You can simplify by using command+shift+H to hide all applications but those you’re working on. Or you can use “Spaces” to keep application that are open, but which you’re not currently using, out of sight and out of mind.

How many of those buttons in Word do you ever use anyway?

3. Use planning tools
Before I started using planning tools I’d often find that I’d repeatedly remember — often at completely inappropriate times, like driving or meditating — about things I had to do. Things improved a lot when I started doing “brain-dumps” to record all the tasks that had been jumbled up in my mind. You need to capture everything — not just work tasks but personal ones too.

Tools such as OmniFocus not only encourage you to keep lists of things to do, but they also help you organize them by context, so that if you find you have to nip out to the bank you can easily see which other tasks (pick up the dry-cleaning, pick up a prescription) that you can do while you’re out and about.

I have to say that using planning tools has reduced the level of distraction in my meditation practice more than any meditative technique I’ve ever learned.

4. Practice simplicity
I’m not very proficient at “being tidy”, although I have my good days — and on those days I feel happier and lighter. “Being tidy” is the end result of finishing one task elegantly before starting another; rather than leave a bit of paper on the desk as a reminder that some action has to be taken we add the action to our to-do list and file the paper in a “projects in progress” file. Being tidy also provides a good environment for the mind to perform without distraction.

We should be willing to be in silence.

We can also do things like take one or two deep breaths before answering the phone, so that we give ourselves time to let go of what we were just doing and get ourselves into a focused and friendly state before we speak to the person on the other end. When you’re calling a company, would you prefer the phone picked up two seconds earlier, or to be picked up by a person who is centered and friendly?

We should also be willing to be in silence. I use some of my time in the car to listen to podcasts, but I also regard it as important just to drive without other input, and so sometimes my iPod goes off. Driving in silence gives us a chance to let the mind rest without a constant barrage of input.

5. Defrag your mind
Take breaks during the workday: just two or three minutes spent relaxing the body and tuning in to the breath. Your brain needs a chance to rest, and your mind needs opportunities to “defragment” itself.

Time taken out for meditation also helps the mind to become calmer and less restless.

When you’re working on one task, resist the desire to interrupt yourself by checking your email, or Facebook, or whatever. If you’re writing and you notice those temptations arising, just notice them and let go of them. They’ll pass.

It’s not possible to escape multitasking altogether. In fact at times it’s essential. But if we avoid it where we can, and especially if we resist become addicted to it, we’ll feel happier and more integrated. And we’ll make a long-term investment by protecting one of our most valuable assets — the mind’s ability to pay sustained, focused, attention.

As well as teaching behind bars, Bodhipaksa also conducts classes at Aryaloka Buddhist Center in Newmarket, New Hampshire. He muses, rants, and shares random aspects of his life on his blog at bodhipaksa.com. You can follow Bodhipaksa’s Twitter feed at https://twitter.com/bodhipaksa or join him on Facebook.