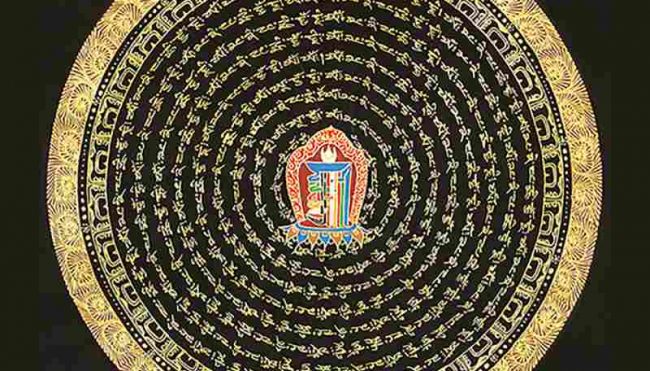 Introduction to and History of Mantra Meditation

Mantras are words or phrases that are chanted out loud or internally as objects of meditation. Often these mantras are associated with particular Buddhist figures, whose qualities can be cultivated by the repetition of the relevant mantra.

Mantra meditation predates Buddhism, probably by hundreds of years. The origins of mantras go back at least to the Vedic tradition that preceded the Buddha, where mantras were used as incantations to influence, or even to control, the gods.

In this section of our site, you can explore how we define mantra meditation, learn how mantra meditation works, and read about the various figures that mantras are associated with and what their mantras mean.

Throughout history, cultures have believed in the sacred power of words. They have believed that uttering certain words or names could control the external world, or control the unseen forces, like gods or spirits, that they believed acted upon the world. We can see that in the English word “spell”, which can mean simply to put letters together to make words, or to use words in order to control the world through magic.

Throughout history, cultures have believed in the sacred power of words…

The words grammar and glamour have the same original meanings. Gramma-techne was the Greek term for the science or art of letters. This came into English as the word grammar, but also came in Scots (as “glammer”) to mean “to cast a spell upon” — to employ the science and art of letter magically in order to enchant. The word glammer was anglicized as glamour, and came to have its more contemporary romantic and aesthetic associations, where someone is able to influence us, not by the power of their words, but by the beauty of their appearance. So the English language contains fossilized notions that words can have magical powers.

The word “enchant” is another word that suggests a connection between words — chanting — and influencing others.

This belief is the power of language was particularly strong when it came to the words that we call names. In ancient India it was believed that if you knew the true names of the gods, then you could call upon them and compel them to do your bidding.

Most of us still, it seems, have a lingering belief in the special nature of names. Imagine how you would feel if you discovered that someone had written your name of a piece of paper, put it in the toilet bowl before using the bathroom, and then flushed your name away. Or think about how hurtful it can be if someone makes fun of your name.

Although early Buddhism used chanting as a means of practice, and used the recitation of verses as a way of cultivating an awareness of the qualities of the Buddha (Buddhanusati), the use of mantras doesn’t seem to have come into Buddhism until the rise of the Mahayana traditions, which incorporated elements of the non-Buddhist approach to spirituality known as “Tantra.”

Tantra made extensive use of mantras as ways of communing with and influencing the gods, and Buddhism co-opted this methodology as a way of getting in touch with the qualities of enlightenment. The Mahayana had already developed a “pantheon” of symbolical figures in human form to represent the diversity of the enlightened state. Given the close contact with the Tantric traditions, it was natural that these archetypal Buddhas and Bodhisattvas came to be associated with particular syllables and mantras.

It was believed that if you knew the true names of the gods, then you could call upon them and compel them to do your bidding.

Strictly speaking, there are no mantras in the Buddhist Theravadin tradition, although there is much chanting. Chants of lovingkindness, such as Sabbe Satta Sukhi Hontu (may all beings be happy), and chants of protection and blessing are very common, and these function as mindfulness practices in exactly the same way as actual mantras.