What is a bodhisattva? “Bodhisattva” is a compound word formed from bodhi (spiritual awakening, enlightenment) and sattva (a being, essence, spirit). There is a possibility that the Pali word “satta” was actually a back-formation from the Sanskrit word sakta, meaning “committed to, fixed or intent upon, directed towards.” The Pali term “bodhisatta” would, from a Sanskrit point of view, have been ambiguous, and it’s possible that it was retranslated into Sanskrit wrongly as “enlightenment being” when it should have been re-translated as “one committed to enlightenment.”

The word, however, has several shades of meaning, and we will explore these below.

Three meanings of the word “bodhisattva”

There are three principle meanings of the term bodhisattva:

We’ll look at these three different understandings of the term bodhisattva below.

1. The Bodhisattva in early Buddhism 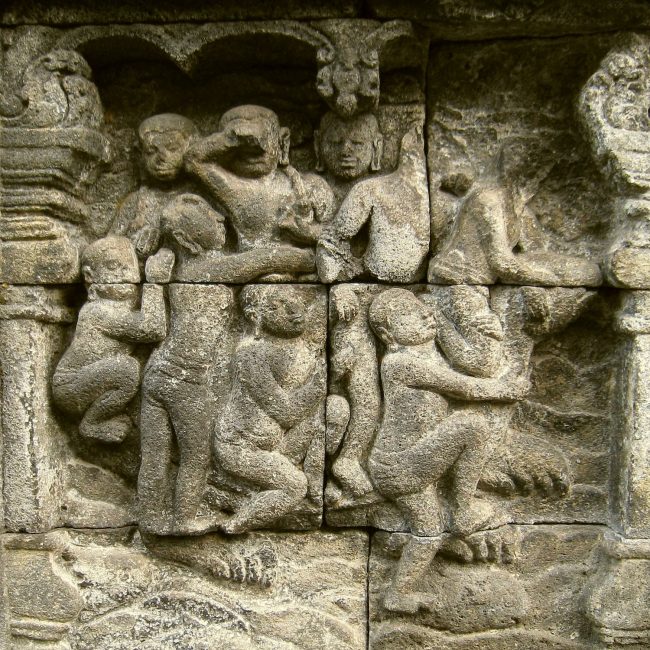 This relief from Borobodur illustrates a Jataka tale in which the bodhisatta (the Buddha in a previous life) is a great turtle who first saves a group of shipwrecked sailors by taking them on his back, then offers his body to them as food to relieve their hunger. By Photo Dharma from Penang, Malaysia – 141 Jataka, Level 1, West Wall, CC BY 2.0

The Pali equivalent to bodhisattva is bodhisatta (satta having the same meaning as Sanskrit sattva — or sakta), and this is a word that appears in the Pali canon to refer to:

a) The historical Buddha, Shakyamuni, before his enlightenment, and,

b) The current life or future lives of the Buddha-to-come, Maitreya (Pali Metteyya).

The word bodhisattva therefore originally meant something like “a being who is well on the way to becoming a Buddha.”

The previous lives of the bodhisatta Sakyamuni are told in the Pali Jataka (“birth”) Tales, a collection of folk tales that later became the basis for Aesop’s fables, and that illustrate the Buddha-to-be’s development of good qualities such as patience, generosity, and compassion. These stories often include elements that might seem bizarre, such as the incident portrayed above, where the Buddha-to-be, in a previous life as a turtle, not only rescues some sailors whose boat had sunk, but gives them his body to eat in order to prevent them starving to death.

2. The bodhisattva as the goal and ideal of Mahayana Buddhism 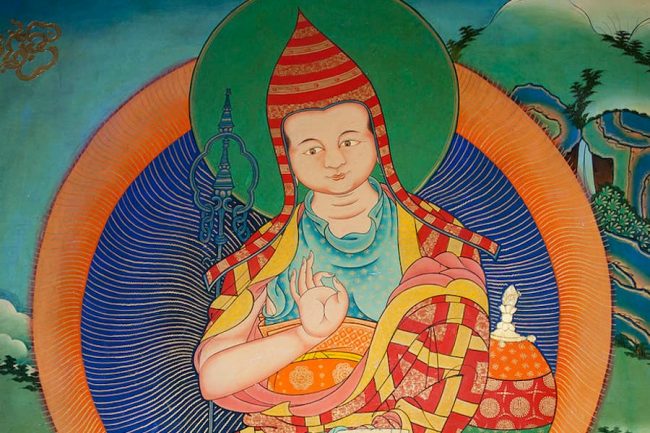 One of the greatest works of Buddhist literature is the 8th century “Guide to the Bodhisattva’s Way of Life” (Bodhicaryavatara) by Shantideva. The Bodhicaryavatara contains ten chapters detailing the practice of the Perfections (paramitas) by which one becomes a bodhisattva. It is through the cultivation of bodhicitta (the mind or heart of awakening) that one becomes a bodhisattva.

Mahayana Buddhists do not aspire to enlightenment purely to free themselves from suffering; they do so out of compassion in order to liberate other sentient beings.

The Mahayana (“Great Vehicle”) seems to have arisen at least in part because of a perception that Buddhist practitioners in certain schools (which they pejoratively dubbed the “Hinayana,” or “Lesser Vehicle”) had too narrow a conception of the Buddhist path, seeing it purely in terms of liberating oneself from suffering without regard to the wellbeing of others.

This self-centered orientation was in conflict with the Buddha’s original emphasis that his disciples “go forth for the welfare of the many” and with his own untiring concern with the wellbeing of others. Mahayanists therefore looked back to the Buddha’s own life for inspiration. Prior to his own enlightenment, the Buddha-to-be, or Bodhisattva, was said to have spent countless lifetimes cultivating the perfection of compassion and generosity. The Jataka tales mentioned above contain a vast body of folklore in which the Bodhisattva, whether in human or animal form makes great sacrifices in order to help others.

Inspired by both the actual and the mythic stories of the Buddha, Mahayanists reinstated compassion at the heart of Buddhist practice. rather that aiming at Arhatship — the individual liberation of the Hinayana — Mahayanists aimed to attain enlightenment for the sake of all beings.

To Mahayanists, wisdom and compassion were considered to be inseparable. To truly see the nature of reality is to see that the whole conception of separate entities is a delusion. Paradoxically, therefore, a “bodhi-being” has to see that there are no beings to save in order to want to save them, and therefore to become a “bodhi-being”!

The Bodhisattva path is said to take many lifetimes.

3. The Bodhisattva as a devotional object 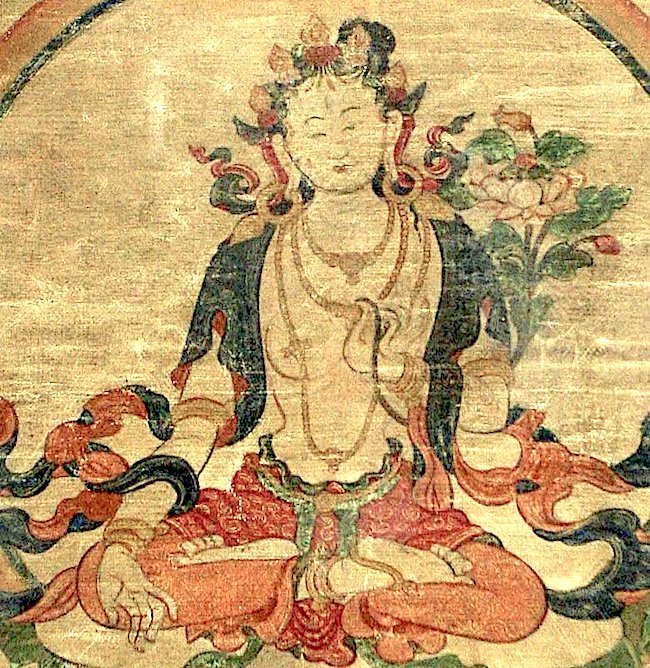 Mahayana Buddhism, a later historical development, vastly increased the range of objects of devotion by introducing new Buddhas and Bodhisattvas.

The historical Buddha had always been an object of great devotion to his followers. He himself had encouraged the veneration of the tombs of previous “Solitary Buddhas” or pratyekabuddhas. The Buddha-to-be, Metteyya (Sanskrit: Maitreya), was also an object of veneration and prayer. There was never, therefore, any sense of there being only a single (or no) focus for devotion in Buddhism. But the Mahayana broadened the range of devotional figures, by introducing “new” Buddhas and Bodhisattvas. How did this happen?

First, it may well have been the case that existing pre-Buddhist or simply non-Buddhist figures were incorporated into the Buddhist tradition and promoted, as it were, to enlightened status. This seems to be the case with Vajrapani, who began life as a Yaksha who acted as the Buddha’s protector. Some scholars have also speculated that Manjushri began as a celestial musician, or gandharva. It also seems that Tara began life as Durga, a Brahminical deity.

Second, it’s likely that some Buddhist deities first appeared as spontaneous manifestations in meditation practices. It’s fairly common for meditators to have meaningful and stable images appear as a result of the mind attaining unusually concentrated states of mind. These images are known as nimittas. A meditator who slips into a particularly refined state of mind may see, for example, a still pool or water or a jewel hanging against an infinite black background.

It’s conceivable that a meditator, upon having a particularly strong experience of compassion, say, experienced a vision of a beautiful and loving goddess caught in the act of stepping from a lotus in order to help sentient beings. And so, Tara would be “born.” In certain states of meditation the border between the unconscious and conscious minds can be crossed more easily, and the mind can begin to see things in a more symbolic way — as in dreaming but with a greater degree of mindfulness than is found in normal daily life.

Bodhisattvas may then be irruptions into waking consciousness of symbolic representations of meditation experiences. It is not unknown for Buddhas and bodhisattvas who appear in this way to even give teachings. Some Mahayana sutras may have started in this way.

Meditators who had such visionary experiences may have encouraged others to meditate upon the images that had spontaneously arisen, and so the tradition of sadhana, or the visualization of Buddhist deities, may have arisen.