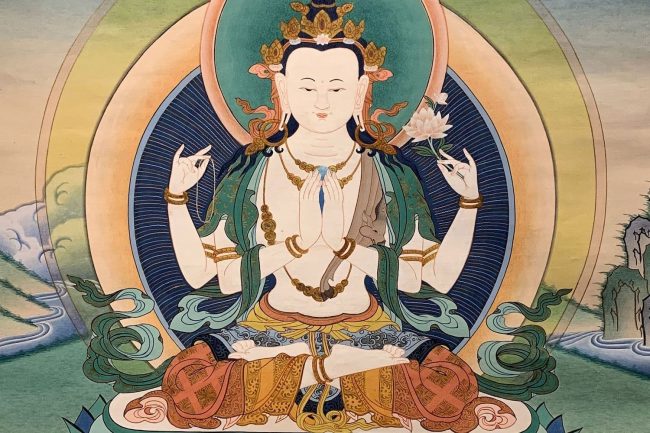 There are various forms of Avalokiteśvara (Chenrezig in Tibetan). The four-armed form is shown here. There is also a 1000-armed form — the many arms symbolizing compassion in action. And in the far east, Avalokiteshvara turned into the female Bodhisattva, Kuan Yin.

Both jewels and lotuses are important symbolic elements in Buddhism.

Jewels represent what is most precious, so that Buddhists worship not just the Buddha, but the three jewels (Buddha, Dharma, or the teachings, and Sangha, or spiritual community). and jewels were considered indestructible, which made them an excellent symbol for eternal truths.

The lotus represents purity, in terms of how the enlightened mind is untouched by the negativity of the world. Just as the lotus can exist in muddy water without being soiled, so an enlightened being can exist in an impure world without becoming contaminated by its greed, hatred, or delusion.

The mantra is often “translated” as “Hail to the jewel in the lotus” but the Sanskrit simply can’t mean that.

But if this is the case, then according to the rules of classical Sanskrit, then Manipadma would have to be a feminine figure. And Avalokiteśvara is male.

However, if the mantra was originally in a non-Sanskrit language with different grammatical rules, and the vocative -e ending was applicable in that language to a masculine figure, then Manipadma would simply be another name for Avalokiteshvara.

How the Mantra Works

Mantras often start with Oṃ, have a central element that’s related to the figure the mantra belongs to (sometimes that’s simply their name), and then end with another syllable, which is commonly Hūṃ, although it can also be “Svāhā” or something else.

The way I understand mantras is that the central part connect us (Hūṃ) with Oṃ, which is the potential for awakening that lies within the universe, and within us. So effectively we’re saying:

I never studied Sanskrit, but I did study Pali, which is a related language, at university. And one of the things you discover is that often you have to read a Pali sentence backward in order to make sense of it. So I suggest reading the three points in the numbered list in reverse order so that you’ll have a better sense of how an ancient Indian Buddhist would have understood the mantra.

The Significance of the Mantra

This is probably the best known Buddhist mantra. I swear I remember hearing it chanted on an episode of the BBC Sci-fi series, Dr Who, when I was a young kid back in the 1960s, and even before that, in the 1940’s it featured on an American radio show called the Green Lama.

This mantra is very widely chanted in Tibet, and not only chanted but carved onto stones, printed onto flags, and embossed onto prayer wheels. The illustration above shows the mantra’s six syllables, which from left to right are: Om Ma Ni Pa Dme Hum.

Tibetans find Sanskrit hard to pronounce (so do westerners, actually, but in different ways) and so Tibetans pronounce “Padme” as “peh-may”.

Recordings of the Mantra

We’ve created a YouTube video of images of Avalokitesvara, accompanied by the mantra:

Or click below to listen to an audio-only recording of the Avalokitesvara mantra:

Pronunciation notes for the Avalokitesvara mantra

The Bodhisattva Avalokiteśvara (or Avalokiteshvara)

Avalokiteshvara’s name means “The Lord Who Looks Down (in compassion).”

Avalokiteshvara forms a protective trinity along with Manjushri and Vajrapani. He is the protector of the Lotus family of deities, which also includes Amitabha and Tara.

In Tibet, Avalokitesvara is known as Chenrezig, and the Dalai Lama is said to be an emanation of this Bodhisattva. In the far east, Avalokiteshvara turned into the female Bodhisattva, Kuan Yin (Chinese) or Kannon (Japanese).

Avalokitesvara is also popularly known as Padmapani, or “Holder of the Lotus.”

To western eyes, the depiction of Avalokiteshvara as having four arms can seem bizarre or alien. The first time that I saw a picture of this Bodhisattva I was mildly repelled, and couldn’t help wondering about how all those arms joined to the body!

Later I came to realize that this is simply an iconographic convention, and one that we also have in an important Western art form, the comic strip. How does a comic strip artist show that a character is in motion? Often this is done by having motion lines behind a figure to show movement, or by showing multiple versions of body parts, like a stroboscopic photograph. Here’s an example:

The outer arms hold a mala (rosary) and a lotus flower, as if as gifts. These are Avalokiteshvara’s offerings to the world — his compassionate activity extending into the world. The lotus symbolizes wisdom, while the mala represents the gift of meditation, and also comments on the necessity for the constant repetition of skillful activities in order to attain enlightenment.

This multi-limbed approach was taken to another level in the thousand-armed and eleven-headed form of Avalokiteshvara. According to legend, Avalokiteshvara made a vow, in the presence of the Buddha Amitabha, to manifest in all the realms of existence in order to save all sentient beings. He also vowed that if he were to lose his compassion for even a moment, that he would shatter into a thousand pieces.

At one time, having worked tirelessly for the welfare of beings, Avalokiteshvara, at Amitabha’s prompting, looked back and saw that there were still uncountable beings suffering in samsara. At that point he became discourage, fainted, and shattered into a thousand pieces. Amitabha gathered up the pieces and reassembled them into a form with thousand arms and eleven heads.

Although he is associated with compassion, Avalokiteshvara is, like all Bodhisattvas, symbolic of wisdom as well. He is connected with the Heart Sutra in particular, and that text is in fact a teaching he gave on the topic of emptiness (shunyata) to Shariputra. He is also associated with the Lotus Sutra.

Avalokiteshvara is the spiritual father of Tara, who is said to have been born from a lotus that grew in a lake formed by the tears he shed as he gazed in compassion at the infinite sufferings of the world.