With a diacritic font installed, the mantra is transliterated thus: 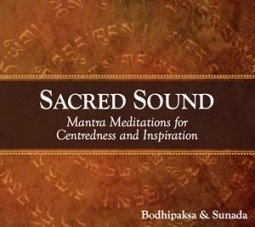 Sacred Sound: Mantra Meditations for Centeredness and Inspiration is available as an MP3 download from our online store.

Manjushri is a Bodhisattva who represents wisdom, and his mantra also symbolizes that quality. He holds a sword in his right hand — symbolizing his ability to cut through delusion. In his left hand, by his heart, he holds the stem of a lotus flower, which bears a book — the Perfection of Wisdom teaching, or Prajnaparamita.

The syllables between Om and the concluding Dhīh are the first syllables of a syllabary called the arapacana because it begins with A RA PA CA and NA. (A syllabary is like an alphabet, but made up of syllables). This syllabary is found in a number of Buddhist texts, including some Perfection of Wisdom (prajñaparamita) texts. Many of the texts in which A RA PA CA NA (and the rest of the syllabary) appears are not connected with Manjushri, but according to Dr. Conze (in the introduction to The Large Sutra on Perfect Wisdom) “in later literature is is always connected with the Bodhisattva Manjushri.”

The individual syllables A RA PA CA and NA have no conceptual meaning, although they are seen as having symbolic connections with various spiritual qualities.

Here’s the schema laid out in the Large Sutra of Perfect Wisdom (adapted from Conze):

A leads to the insight that the essence of all things is unproduced.

RA leads to the insight that all things are pure and free of defilements.

PA leads to the insight that all dharmas have been “expounded in the ultimate sense.”

CA leads to the insight that the arising and ceasing of things cannot be apprehended because in reality there is no arising or ceasing.

NA leads to the insight that although the names for things change the nature of things behind their names cannot be gained or lost.

These are all important concepts in the Perfection of Wisdom, although to say they are concepts is a bit limiting — really they’re attempts to describe the indescribable nature of reality.

Dhīḥ is defined as meaning:

There’s more material on Manjushri below. See the links below the pronunciation guide for other pages.

You can listen to this mantra on a Youtube version…

… or click below to listen to an MP3 version:

Manjushri is a Bodhisattva who represents wisdom. Along with Avalokiteshvara and Vajrapani, he is one of a trinity of family protectors. The family that Manjushri protects is known as the Tathagata family, which includes the historical Buddha, Shakyamuni, as well as Vairochana, the central figure in the Five Buddha Mandala.

“Tathagata,” the name of Manjushri’s family, means “The one thus gone [to Nirvana]” or (because of the ambiguities in Sanskrit) “The one thus come [to this world]” and is an epithet of the historical Buddha.

Of all the Bodhisattvas, Manjushri has perhaps the closest association with the Buddha, and could be said to represent his genius (in the sense of his attendant deity) or daimon (attending spirit or inspiring force). 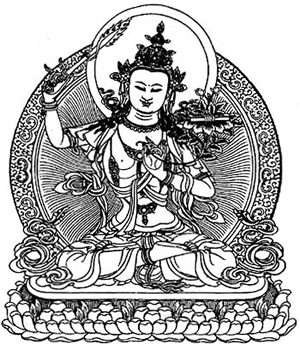 Manjushri is depicted as a beautiful young prince, usually said to be sixteen years old. His freshness and beauty represent the fresh way that the awakened mind sees the world. While the unelightened mind typically sees life as being ordinary, to those who are awakened life is magic, extraordinary, and full of potential.

The name Manjushri means “Gently Auspicious One.” He is also known as Manjughosha, or “Gentle Voiced One.”

Like most Bodhisattva figures, he is seated on a lotus flower. Because the lotus grows from mud in often foul water, and yet remains unstained, it is considered to represent the purity of wisdom, which can exist in the midst of delusion without being affected by it.

Manjushri’s most distinctive emblem is the flaming sword that he holds aloft in his right hand. The sword symbolizes his mind’s ability to cut through the fetters that bind beings to the cycle of delusion and suffering.

The flames suggest that the sword is not a literal one, and flames in Buddhist iconography invariably represent transformation; Manjughosa’s wisdom does not destroy ignorance in the conventional sense, but transforms it into Wisdom.

In Manjushri’s left hand is his other characteristic emblem: the stem of a lotus, which bears a book. This book is the Perfection of Wisdom, which is both the source of his realization and a concrete symbol of it. In the Manjughosa form the book is held to the heart.

There are numerous other variations of Manjushri, some of which go by different names. For example he is sometimes seen riding a lion, or holding a bow and arrow.

Manjushri features prominently in many Perfection of Wisdom texts. He makes a late appearance in the Lotus Sutra, and is particularly prominent in the Vimalakirti Nirdesa. Both of these are early Mahayana sutras. However he is most often found in the later Perfection of Wisdom Sutras, where he is, in effect, the Buddha’s spokesman. In some of these sutras, the dialogues that Manjushri has with the Buddha are so intimate that we can get a sense that we are hearing the Buddha thinking out loud.

Manjushri is associated with ordinary intelligence and mental accuity as well as transcendent Wisdom, and his mantra Om A Ra Pa Ca Na Dhih is said to confer intelligence. Shantideva, the author of the great Bodhicaryavatara (“Guide to the Bodhisattva’s Way of Life”) is said to have gained his wisdom by communing with Manjushri by night, while appearing by day as a slovenly and lazy scholar-monk.

Some scholars believe that Manjushri has his origins in a Ghandharva (celestial musician) called Pancashikha, who is found in some early Pali texts. the name Pancashikha means five-crests, and has a correspondence with Manjushri’s epithet, Pancaciraka, “Possessing Five [Hair]-Braids.”

Being a musician, Pancashikha is also “gentle voiced” and is praised by the Buddha for the quality of his singing. Both figures are also involved in question-and-answer sessions with the Buddha, and both are generally depicted as eternally young, although this is so common a quality that it’s not in itself persuasive.

Manjushri is often known as Kumarabhuta (“Youthful Being”), although he does also manifest in some texts as an elderly man. His quality of having eternal youth (sometimes despite appearances to the contrary) symbolizes the eternal freshness and spontaneity with which the enlightened mind approaches life.