Vajrapani doesn’t, to many newcomers to Buddhism, look very Buddhist at all. He is a Bodhisattva who represents the energy of the enlightened mind, and his mantra also symbolizes that quality.

Vajrapani is pictured dancing wildly within a halo of flames, which represent transformation.

He holds a vajra (thunderbolt) in his right hand, which emphasizes the power to cut through the darkness of delusion. Vajrapani looks wrathful, but as a representation of the enlightened mind, he’s completely free from hatred. 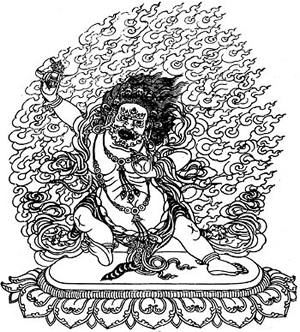 Vajrapani’s mantra is simply his name, which means “wielder of the thunderbolt”, framed between the mystical syllables Om and H?m. This mantra helps us to gain access to the irrepressible energy that Vajrapani symbolizes. A familiarity with Vajrapani does, of course, help here, although the sound of the mantra is itself rather energetic.

Vajrapani is a member, along with Avalokiteshvara and Manjushri, of the trinity of Bodhisattvas known as the Three Family Protectors. The Buddha family of which Vajrapani is the protector is the Vajra (thunderbolt) family, which includes Akshobya (the lord of the Vajra family) and Yamantaka.

Vajrapani (Holder of the Thunderbolt) represents the energy of the enlightened mind, and energy that breaks through delusion. He dances wildly within a halo of flames, which represent the transformative power of Awakening. He holds a vajra (thunderbolt) in his right hand, which emphasizes the power to cut through the darkness of delusion. 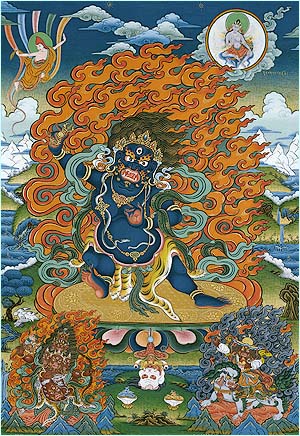 Non-Buddhists (and Theravadin Buddhists) seeing Vajrapani for the first time may wonder how such a wrathful-looking figure could possibly fit with the peaceful associations they have with the Buddhist tradition, although such figures are actually very common in the Mahayana and Vajrayana traditions.

Of course it’s not really possible adequately to represent the qualities of Enlightenment in any image, and so even the peaceful forms of Buddhas and bodhisattvas are to some extent misleading.

Enlightened beings do not, in reality, sit around all day on lotuses smiling serenely. The Buddha himself was fearlessly active in engaging with the other religious figures and philosophers of his day. His fearless approach to life is perhaps characterized mostly clearly by his encounter with Angulimala, who was an infamous bandit who killed his victims and added a finger from each to the garland he wore around his neck (his name means “Garland of Fingers”). Although warned to stay away from this dangerous figure, the Buddha insisted on going into the forest to confront Angulimala, who converted to Buddhism, became a monk, and eventually became Enlightened.

Therefore, it’s just as appropriate to represent an Enlightened being as dancing wildly, naked and fearless.

Another way of looking at the apparent fierceness of Vajrapani and other “wrathful” figures is to consider what a Buddha looks like from the point of view of that part of ourselves that doesn’t want to change. We may, at some level, want to meditate, to live ethically, and so on, but other parts of us are profoundly threatened by the possibility of change.

Our habits can form a kind of “sub-personality” that can try to hijack our lives. After all, habits of denial, craving, and aversion face extinction if we continue to practice the path of mindfulness and compassion, so it’s not surprising that they sometimes put up a protest. From the point of view of those powerful and yet primitive parts of ourselves, Enlightenment, rather than looking attractive, seems to be threatening and demonic.

Because of this dual nature, Vajrapani has his peaceful forms as well, and early depictions of him, while muscular and athletic, are nothing like the wild figure depicted above.

Vajrapani has his origins in the Pali canon, as a Yaksha, or nature spirit. In this story, in the Digha Nikaya, a Brahmin (priestly) youth named Ambattha, is first of all rude to the Buddha, believing him to be of a lower social caste, and then refuses to answer a question the Buddha — who is unfailingly polite in the encounter — puts to him about his ancestry.

After Ambattha refuses to answer the question twice, the Buddha reminds him that there is a traditional belief that if you refuse to answer the question of an enlightened one three times, your head will split in seven pieces. Of course this never happens, but “Vajirapani” (the Pali form of his name) appears, ready to make good on the ancient prophecy. Ambattha is of course terrified and promptly answers the Buddha’s question.

Vajrapani also has his mythic roots in Indra, the Indian thunder god. He’s thus connected to Zeus and Jupiter, who, along with Indra, are all variants of the same thunderbolt-wielding sky-deity. (“Dyaus” is Sanskrit for “sky,” and Indra is also known as “Indra Dyaus.” “Zeus” is the Greek form of Dyaus. Jupiter is “Dyaus-piter” or “sky father.”) 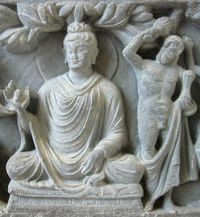 The earliest depictions of Vajrapani, as we noted above, are not particularly wrathful. In this image, from the second century, both the Buddha (seated) and Vajrapani (standing) are sculpted in classic Greek style. Vajrapani here is shown as a powerful muscular figure protecting the Buddha, and his iconography is essentially that of Herakles (Hercules). The characteristics he shares with the later form are the vajra (thunderbolt), his powerful frame, and his semi-nakedness, which is typical of a Greek athlete.

In later forms, as Vajrapani becomes more other-worldly, he is shown as being dark blue in color. He perhaps borrows this color from Akshobhya, the head of the Vajra Family. But this is also the color of a thunder cloud.

He represents the power, energy, and fearlessness of the Buddhas. He stands in (or rather is caught in) the warrior pose that will be familiar to those who practice Hatha Yoga. In his outstretched right hand he wields a vajra, and his left hand holds a lasso with which to bind demons.

Vajrapani wears a loin-cloth around his hips. The cloth is made from the skin of a tiger. He is adorned with the five-pointed Bodhisattva crown, but the crown bears five skulls. He has necklace hanging to his belly, but he also has a snake around his neck. Snakes and dragons are associated with clouds and rain, fitting in with Vajrapani’s origins as a god of thunder.

Vajrapani has a bulging third eye in the center of his forehead. Just as Ambattha’s hairs stood on end when he encountered Vajirapani, so the bodhisattva’s hair flies wildly in the air.

Although Vajrapani and other similar figures are often described as “wrathful” it’s important to realize that they do not represent ordinary anger, but simply the power and fearlessness of the awakened mind. There is no place in Buddhist practice for “righteous anger,” and despite his appearance Vajrapani is a profoundly compassionate figure.