Vajrasattva is a Bodhisattva that symbolizes primordial purity. Meditating upon him helps us to purify the mind of greed, hatred, and delusion. At his heart he holds a vajra thunderbolt, which represents his upaya, or his skill in liberating beings by means of compassion. At his waist he holds a bell representing wisdom.

Vajra means “thunderbolt,” although it can also mean “diamond.” The thunderbolt was the most powerful force, while the diamond was the most indestructible object known. The vajra that he holds is almost identical to some of the stylized thunderbolts held by Zeus in ancient Greek statues. “Sattva” means “being.”

Vajrasattva is therefore the “Thunderbolt being.” This makes him a kind of Buddhist Zeus, although his thunderbolts are destructive only of that which holds us back from awakening.

Below is the text of the 100-syllable mantra of Vajrasattva. You’ll find a link to an audio version of the mantra at the foot of this article. If you want to see the script for this mantra, visit the excellent article at Visible Mantra.

A symbol of the mind’s inherent purity

Vajrasattva’s name (Tib. dorje sempa) means “diamond being.” He represents the innate purity of the mind.

You can imagine your mind as being like a sky through which clouds pass. The clouds come and they go, but the sky remains untouched. The sky is inherently blue and clear, and although its blueness and clarity can be obscured it can never be destroyed. The clouds are like the greed, hatred, and delusion that pollute the mind. Because of the transient nature of these mental states, they cannot be said to be an inherent part of the mind. They may obscure the mind’s inherent awareness and compassion, but those qualities are never absent.

The meaning of the mantra

Oṃ Vajrasattva! Preserve the bond!
As Vajrasattva stand before me.
Be firm for me.
Be greatly pleased for me.
Deeply nourish me.
Love me passionately.
Grant me siddhi in all things,
And in all actions make my mind most excellent. hūṃ!
ha ha ha ha ho!
Blessed One! Vajra of all the Tathāgatas! Do not abandon me.
Be the Vajra-bearer, Being of the Great Bond!
āḥ (hūṃ phaṭ)

Explanation of the mantra 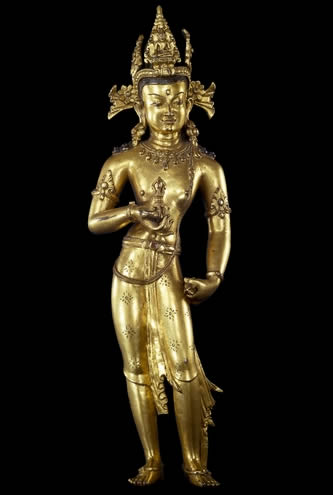 Vajrasattva sits above the Mandala of the Five Buddhas, which includes Akshobya, Ratnasambhava, Amitabha, Amoghasiddhi, and Vairocana. In some traditions he’s regarded as being the ādi-buddha, or the primordial Buddha from whom all other Buddhas emanate. If Vajrasattva is seen as being the mind’s innate purity, then his primordiality and his being the origin of the other Buddhas makes sense — all manifestations of Awakening are nothing more than a revealing of the mind’s innate awareness and compassion.

The most distinctive symbols associated with Vajrasattva are his bell and vajra (or thunderbolt). The bell represents wisdom, and the vajra represents the Bodhisattva’s upaya, or his skill in liberating beings by means of compassion.

Vajrasattva is generally white in color, representing his purity. He is dressed in the Bodhisattva robes of a prince, adorned with jewels, and with long flowing hair. He is eternally young, existing outside of time and space.

MP3 version of the Vajrasattva mantra, chanted by Bodhipaksa

You can listen to the 100 Syllable Mantra of Vajrasattva below, chanted by Bodhipaksa.

MP3 version of the mantra, chanted by Choden Rinpoche

And here’s another version, this time chanted by Choden Rinpoche, a Tibetan teacher who was born in 1933 in eastern Tibet, and who teaches in the centers of the Gelug FPMT (Foundation for the Preservation of the Mahayana Tradition). You’ll hear that it’s the same basic mantra, chanted in a different style.

Needless to say there are many variants and corruptions of this mantra. The version at the start of this article is a “corrected” version of the mantra that was originally given to Sangharakshita by his teacher, Dudjom Rinpoche. The Sanskrit in that version had become slightly corrupted, and so the original Sanskrit was restored by Sanskrit scholar Sthiramati.

The text of the version chanted by Choden Rinpoche, above, is as follows:

If you compare this with the corrected version above you’ll see that a lot of distortions have crept into the Tibetan version because of the transliteration from Sanskrit, to Tibetan, back to English.