How does mantra meditation work? 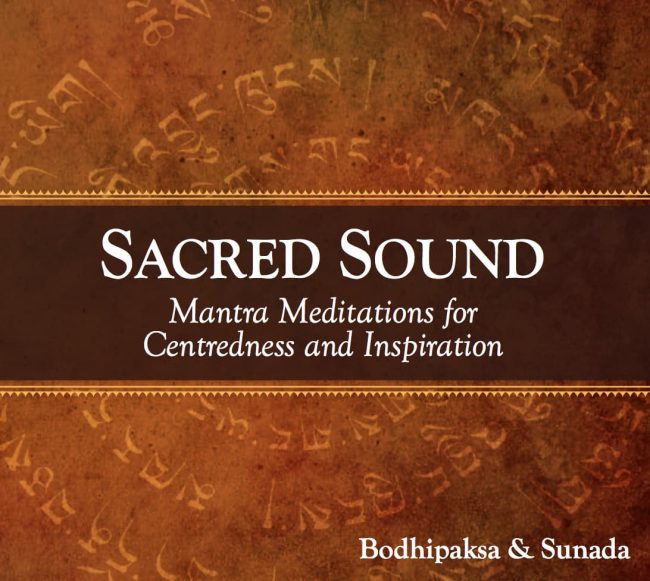 Sacred Sound: Mantra Meditations for Centeredness and Inspiration is available as an MP3 download from our online store.

Mantras are rather mysterious. They are said to be “sound symbols” – sounds that in some way correspond to and evoke the spiritual forces that can be represented in visual form as Tara, Avalokiteshvara, etc. We can easily see how an image of a particular figure can have symbolic value, but quite how a sound does this it is not possible to explain rationally.

Perhaps it’s best to think of mantras as being a cross between poetry and magical incantations. Many mantras don’t make any real, rational, sense, even in Sanskrit, and so often they can’t really be translated in the same way that a normal sentence can.

The mantra of Avalokitesvara, for example, is just his name, in an older form — Manipadme (“The Jewel Lotus”) sandwiched between the mystical syllables “Om” and “Hum.” It doesn’t really mean anything beyond being a salutation or evocation.

Do mantras have meaning?

Mantras often contain syllables like Om, Ah, and Hum (approximately pronounced hoong), which have no literal meaning whatsoever. There are various “understandings” or interpretations of what these might mean, and the three syllables have been correlated with (respectively) body, speech, and mind; or (again respectively) the Dharmakaya, Sambhogakaya, and Nirmanakaya.

Mantras are also correlated with the Buddhas of the mandala, with Om being the seed syllable of Vairochana, the central Buddha, Ah with Amoghasiddhi, the northern Buddha, and Hum with Akshobya, the Buddha of the east. These kinds of associations can become important as we become familiar with Buddhism.

Some words in mantras give rise to more definite associations. The “mani” in the Avalokiteshvara mantra (Om mani padme hum) means “jewel,” while “padme” means “lotus”. The mantra is sometimes taken to mean “Hail to the Jewel in the Lotus” although the grammar is rather obscure.

I see the mantra as being more poetic and symbolic. The jewel is symbolic of the clarity of wisdom, while the lotus is a symbol both of purity and compassion. So the Avalokitesvara mantra brings together wisdom and compassion. In reciting the mantra, one is calling those qualities to mind.

But trying to understand mantras intellectually is probably a bit like deconstructing a joke – you can do it, but by the time you have finished the task you’ve completely lost the point of the joke in the first place.

I’d consider it within the bounds of possibility that such “supernatural” explanations of the benefits of mantras are correct. I recall reading about two experiments testing the British biologist Rupert Sheldrake’s theory of “morphic fields.” In one experiment Britons and Americans found it easier to learn a genuine Japanese nursery rhyme than a newly-composed Japanese poem with the same rhyming structure. In another, it became easier for a group of people to solve a visual puzzle once other people (who they were not in contact with) had already solved the problem. These experiments, and the theory they were testing, are of course scientifically controversial, but the possibility remains that a pattern or words may somehow have a direct effect on the mind. I’m more than a little skeptical of this, but not closed to the idea.

Others, including myself, hold that one develops associations with the mantra as one chants it and begins to learn more about the bodhisattva. It’s common for people to develop an attraction to a particular figure and they then naturally want to know more about that particular deity. The mantra becomes associated with the qualities of the figure, and thus becomes a mental reminder of those qualities. The Tara mantra then begins to evoke the qualities of active compassion that Tara embodies.

Certainly, it is possible to benefit from a mantra while knowing nothing about it. Many people have found that very quickly after taking up a mantra (perhaps the first time they chant one) they notice a change in the quality of their experience. As an object of concentration — like any other — a mantra can help to still the mind. While you are reciting a mantra out loud or internally, there tends to be less mental chatter. There’s only so much “mental space” for thinking to take place in, and if you’re taking up some of that inner space with a mantra you’ll be doing less thinking. And since much of the thinking we do is concerned with things we crave, or with things we’re irritated by, depressed about, or worried about, we naturally start to crave, worry, be angry, and be despondent less when we’re reciting a mantra. Even if there is a parallel stream of internal discourse going on at the same time as the mantra (and it can happen that we’re chanting and thinking at the same time) the chanting creates a sense of continuity within our experience that can grow with practice.

Mantras can help us to develop mindfulness. The sound of the mantra is a mental object, and paying attention to the sound of the mantra can be a form of meditation, just as paying attention to the sensations of the breath is a meditation. By bringing the mind back over and over again to the mantra (getting away from the kind of multitasking where we’re “kind of” chanting the mantra while also thinking about work, relationships, and shopping) the mind can become more unified and less scattered. We become more attentive and present.

If we pay attention to the correct pronunciation of the mantra (and I encourage you to do that) then that becomes another way to be mindful — making sure that the lips, mouth, tongue, vocal cords, etc, are all working together in a very precise way. Being conscious of one’s posture and breathing can also feature here.

Mantras as a devotional practice

The word Mantra is said to mean “that which protects the mind,” although a more literal meaning based on the etymology might be “an instrument of mind.”

Mantra meditation existed at the time of the Buddha but was not practiced by Buddhists and was closely tied to the ancient, Brahminical Vedic religion in which sacrifices and prayers to the gods were considered to be a major spiritual practice. It wasn’t until many centuries after the Buddha, and with the arising of the Mahayana, that mantras became incorporated into Buddhist practice.

However there were many “magical chants” in early Buddhism which although not mantras proper were considered central to Buddhist meditation practice. These included the famous “sabbe satta sukhi hontu” (may all beings be happy) and many similar phrases such as “sabbe satta avera hontu” (may all beings dwell in peace”), and arguably even the chanting of the Three Refuges and of the Precepts.

These chants can be regarded as paritta or “verses that protect.” There’s a collection of these in the Pali scriptures, including gems like the following:

“O Buddha, the Hero, thou art wholly free from all evil. My adoration to thee. I have fallen into distress. Be thou my refuge,”

The latter of these would seem to be a prayer to the sun that has been repurposed as a hymn to the Buddha (who was said to be golden-hued, who had the vision of Prajna, who illuminates the earth with his wisdom, and whose dhamma (teachings and practices) offer protection from suffering.

There was therefore an early predisposition to using chanting as a protective practice, and perhaps this laid the ground for the later incorporation of mantras into Buddhism.

Particularly interesting in this regard is part of the Buddha’s teaching at Isigili, where he recites the names of previous spiritual teachers:

The list goes on, and the Buddha concludes: “Do salute these great sages of immeasurable virtue who have gone beyond all attachment and attained Parinibbana.”

To my mind there is something very mantra-like about the chanting of names in this way, particularly since they are arranged in a poetic fashion, and in the idea that we should salute the Awakened Ones by reciting their names. Chanting the name of a deity in a devotional way is the very essence of mantra. Mantra chanting therefore can be a devotional practice in which we cultivate and express feelings of admiration, love, and gratitude to those who are further on the path than we are.