How can all beings be well when they have to destroy each other to live? 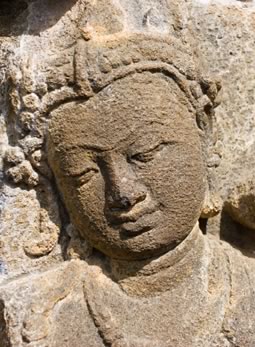 When I have come close to the end of my Metta practice i imagine my body as the Earth, my heart as the cceans and my mind as the sky, and in all of these places I wish all living things well and freedom from suffering. So far, so good!

This has been puzzling me.

This is, as I said, an excellent question, and a sign that David is really engaging with the meditation practice — not just going through the motions but reflecting on what he’s doing and what it means to cultivate lovingkindness.

He’s highlighted a very interesting paradox regarding metta (lovingkindness). On the one hand, we wish that all beings be well. That would include not just humans but animals as well. Now humans can choose to be vegetarian and can make ethical decisions not to harm or kill others, but animals generally aren’t capable of making those choices, or (and I’m thinking of other higher primates here) can do so only in very limited ways. And some animals — think of a lion, say — have to eat other animals in order to live. In the metta practice we’re wishing that the lion and its prey both be free from suffering, and yet the lion has to eat the prey in order to survive! We’re wishing that the lion be well, and yet it has to kill. We wish the prey well and yet it has to be killed.

The way I think about this is that the practice of lovingkindness is first and foremost an exercise for changing ourselves. When we are wishing others well by repeating phrases such as “May I be well, May I be happy, May I be free from suffering” this is (probably) not directly having any effect on other beings. Well, there is some research that suggests that how we think about others can directly affect how they feel, but even if that’s true the main effect is on us and on how we feel.

So when I’m sending metta out into the world, including to animals as well as humans, what I’m really doing in cultivating an attitude of being loving. I’m cultivating the habit of responding to others with love and compassion.

Now I can change myself directly, but I have much less influence over others. Actually it sometimes seems that I don’t even have that much influence over myself, but my ability to change other people is even more limited. I can become a more loving person by cultivating lovingkindness, and this will affect how I act towards others. I’ll be less likely to cause harm to other beings, whether animal or human. For example if I have a problem with mice in my house I’d choose to catch and release them and I wouldn’t use poison or the conventional mousetraps that kill the mice. When I ran a retreat center in the highlands of Scotland we caught and released a lot of mice! We even chose not to have a cat because we didn’t want the cat to kill the mice (and the wild birds, which became tame enough to come and sit on our hands).

So I can become more loving myself and I can choose not to cause harm, but I can’t stop all the killing that takes place in the world and that’s an integral part of nature’s cycles. No matter how much lovingkindness I develop, lions will still eat gazelles, foxes will still eat mice, hawks will still eat smaller birds, small birds will still eat worms. I can’t do anything about this.

Equanimity, or upekkha (Sanskrit, upeksha), is a quality closely related to lovingkindness and two other practices — compassion and what’s called empathetic joy. These four qualities together — lovingkindness, compassion, empathetic joy, and equanimity — are together called the Brahmaviharas, or Divine Abidings.

However it would be misleading to think of the four brahmaviharas as being completely separate qualities. When we’re cultivating lovingkindness, we often think of the suffering that other beings experience, and this leads naturally to the arising of compassion. When we’re cultivating lovingkindness and we think about beings experiencing happiness we naturally experience empathetic joy. And when we think of the fact that both suffering and happiness are qualities intrinsic to consciousness, and that they arise in the other beings’ experience in a way that’s outside our control, we have at least the opportunity to recognize the limitations of our power to affect the world, and thus to cultivate equanimity.

So in summary, when we cultivate lovingkindness we may be wishing other being well but what’s fundamentally going on is that we’re changing ourselves. We’re cultivating the habit of being loving, and in time (and with conscious practice, reflection, and discipline) this percolates through into our actions so that we cease doing harm and learn to do good. At the same time we have to recognize that suffering (and joy) will arise in the world no matter how much love and compassion we cultivate. We can watch a predator kill its prey and experience in different moments love for both beings, compassion for the being that is suffering, and the equanimity that arises from knowing that this all takes place in a world that’s largely outside of our control.

I have also struggled with the problem of injustice, which has often caused me frustration and suffering.

One quote from Shantideva that I have found useful is:
“Where would I possibly find enough leather
With which to cover the surface of the earth?
But wearing leather just on the soles of my shoes
Is equivalent to covering the earth with it.”

Thank you so much for such a detailed explanation – with so much personal input, so that it was possible to get an idea of how to do metta meditation and what to keep in mind.

I have been watching some very angry clients, and this meditation seemed to be the antidote. Then realised that I myself could/should do it.

So thank you again.