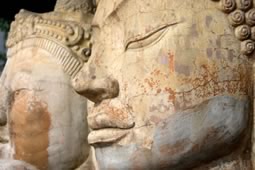 This often happens because the counting has been acting as an anchor for our awareness: it stops us from drifting too far away from the breath. So if we let go of the counting we can often float off into distraction.

Sometimes at the end of every out-breath I take my awareness to my hands in order to keep me grounded. I use the sensations in my hands much as I’d use the numbers.

The physical anchor is a more refined anchor than the counting because it’s non-verbal — it cuts down on the amount of thinking, so that your mind can develop a deeper level of stillness.

Partly I think this works because it makes the practice more interesting. But partly I think it’s something to do with introducing a “stretch” into the practice. What I mean is that I’ve noticed that when my mind stretches to accommodate two separate sensations it seems to calm down very quickly. I can’t explain this, but I offer it as a tool that might be useful.

You might want to play around with this idea of creating a stretch in your awareness and see what happens. Just notice two very different and geographically separate sensations, and pay attention to both simultaneously. And notice what the result is.

what about focusing on the sensation of air moving through the nostrils while your on the in breath? Would that be a good anchor?

I find that works, but only if I keep my attention on the nostrils and some other very specific part of the breath, such as the movement in a very particular part of the abdomen. Otherwise what I get is the sense that my awareness is on one rather generalized experience of the breath rather than “stretched” between two different sensations. The “stretch” seems to create the conditions for a sense of spaciousness to arise, and in that spaciousness exists stillness.

If i find it hard to settle in this stage, I often make a humming noise whilst exhaling, just for 1 or 2 exhales; this brings my focus back to the breathing. But also acts as a ‘stretch’ because I’m concentrating on the sensation of breathe as one thing, and the sound as another.

Sounds are a good way of creating a “stretch” and thus bringing in a sense of spaciousness. You can also just listen to ambient sound while keeping the breath at the center of your awareness, or even be aware of the space in which the sounds exist, so that you have a sense of your consciousness being really expansive and open. All these things help bring stillness quite quickly.

I also find that using what you call a ‘stretch’ causes the mind to become calm quite quickly. My practice involved feeling the breath in my lungs, trying to ‘feel’ my entire body, without the thought of sight, and also to listen for the sound of silence in the room. I know this doesn’t sound logical but there is a presence of silence that you can tune into doing all three seems to force the mind to surrender. Now my question is what happens after you mind becomes quiet? I seem to lose focus shortly after this point…

Essentially there are three factors to be worked with — calmness, contentment, and concentration. If you’re losing your focus it would seem you’re doing fine with the calmness but not so well with the concentration (you didn’t say anything that indicates what’s going on with contentment). explaining how to work with developing greater concentration could amount to a complete course in meditation, but a few quick pointers could include:

I hope this is of some help.

Ive been meditating for awhile now. But today I incorporated your “stretching” idea by observing the sensation of the breath through the nostrils, ambient sounds and body sensations – namely a denseness in the shoulders and the rising and falling of the stomach. I tried to focus on all of them simultaneously which I found a little difficult but workable. One thing that was very different was that I completely lost track of time. I think I meditated for 50 minutes but really can’t be sure!

Oh wow, I didn’t see this thoughtful and insightful answer way back on August 30 2009. Adam’s comment caused me to be notified. What’s super cool and coincidental is, I was telling somebody about this post that is read years ago to a friend of mine just the other day! Great coincidence. Thank you for the thoughtful reply.