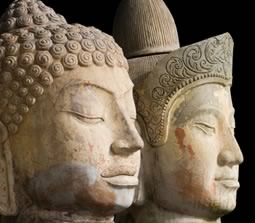 There’s another way that the third stage of the mindfulness of breathing meditation, in which we drop the counting of the first two stages and simply follow the breath flowing in and out, is a progression from those two stages.

Now actually the breathing process isn’t quite like that. It’s not really divided into discrete parts. When you watch the breathing closely in meditation you’ll see that the in-breath shades into a feeling of fullness, which then shades into the release of the out-breath. Then the increasing sense of emptiness at the end of the exhalation shades into the beginning of the next in-breath. There are no distinct beginnings or ends. There’s just one continuous process that changes its character over time. It’s much like looking at a rainbow. There are different colors, but when you look at where one color shades into another you’ll see there are no distinct transitions.

When we experience the breath as chopped up then there’s a tendency for our awareness itself to become discontinuous. We actively experience the in-breath, then the mind goes a bit floppy for a moment, then we pay attention to the out-breath, then the mind goes a bit squidgy again. Somewhere during the times when the mind is taking a little vacation from vividly noticing the breath it decides instead to get absorbed in some thought or fantasy, and we don’t have the mental sharpness to stop it from going on a little (or perhaps a long) wander.

When we get to the end of the second stage and stop counting we have the opportunity to experience the wholeness of the breathing rather than the chopped-up-ness of in-out-in-out. And so our awareness itself becomes more continuous. We’re less likely to get distracted. The mind becomes more attuned to the subtler sensations where the breath is changing from an inhalation to an exhalation, and vice versa. And we develop a very pleasant sense that we have a continuous thread of awareness running through our experience.

I appreciate the guidance to graduate to watching the seamless nature of the breath sensations. From my experience and that of others (from 5 to 90+ years) with whom I shared different modes of ‘Focusing on breathing’, counting the breaths is easier for beginners. They are able to develop some awareness starting from zero awareness. Gradually they can advance to finer modes as explained in the above article.

For absolute beginners,it is very useful to develop periodic though crude awareness of breaths,throughout the day from the time one wakes up till again lying down in bed to sleep.

I have been teaching different modes suited to different activities of the day as explained in this brochure in my web site
https://countingbreaths.com/brochure-us.pdf to absolute beginners from age 5 to 90+ years.

As can be seen from the testimonials on page 3 and 4 of the above brochure and more in my web site http://www.countingbreaths.com, the benefits derived even from these crude modes practiced casually when lying in bed and waiting for sleep, on waking up so on, are phenomenal.

Not every one is interested in deep meditation or enlightenment. Most are happy to relieve their stress by doing a little without allotting time for its practice and enjoying a little benefit. Let us develop different modes and encourage all levels of practitioners. Some of the beginners will advance to higher levels but most are happy with sound sleep, which is guaranteed by these simple modes.

.
While reading this I thought of something that has bothered me lately. I am a seeker I guess and I try different things like self hypnosis, meditation, visualization, every day mindfulness in my own way. Admittedly I stumble and I make mistakes, take wrong turns, Try things that don’t feel right in the end. I learn. I’m slowly getting to a point where i wish to organize and learn more. This might be something I can easily learn on this site but i feel suddenly impatient to ask.

In many guided meditations I’ve found online they often, if not always, say “Breathe in through your nose and out through your mouth.”.
I didn’t realize until now that it feels wrong to me. My mother actually taught me many many years ago how to breathe and the way you describe it above is how I breathe by instinct. There is no pause in my breathing, unless I’m upset perhaps, or ill or very tense.
But breathing in through nose, out through mouth feels like interruption to me. I don’t actually understand the benefit of it.
Is my thinking flawed regarding this? Is there a “proper” way it’s supposed to be done? I would appreciate a word on this. I am a believer that given time and thought and with some awareness, one can trust instincts. I don’t like rules if I fail to see a meaning with them. :D

Much love
And I really like the site you have created here. Impressive.

I also find it odd to breathe in through the nose and out through the mouth, unless maybe I’m exercising. Normally I’ll inhale and exhale through the nostrils. None of my own meditation teachers have suggested doing otherwise…

Thank you Bodhipaksa for your reply. Then I will simply do what feels right to me and trust myself. I am reading articles regarding breathing and I do wish I had found this site earlier. But on the flip side of that, I do believe that we find many things when we are ready and no sooner. I am glad to be here now and have just today spoken to my husband about making me a meditation stool as it appears to be the best thing for me. It is quite silly yet wonderful to be so excited about a piece of equipment. :)
Thank you again and I’ll be around.

If you’re interested, Jenny, there’s a Wildmind community on Google Plus. It’s a very friendly and supportive place. Do feel free to check it out.