The “gaining idea” in meditation 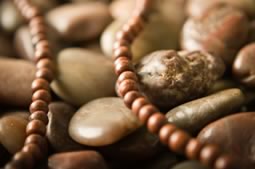 OK, if you’ve been working methodically through this practice you know the score by now. Try doing all three stages for a few days. Practice them every day, if possible, and get to know them well.

Watch out for any tendency to want to skip over one stage (maybe because you don’t like it as much as the others). Each stage has its own special function, so remember to do them in the correct order.

You might want to make your meditation a little longer now, perhaps five minutes per stage, making fifteen minutes.

Shunryu Suzuki, the famous Zen teacher who founded the San Francisco Zen Center and who was a major influence on Western Buddhism, talked about “the gaining idea.” This rather awkward but incredibly useful phrase points to the problem that arises in our practice when we’re hungering for results. We want be enlightened right here and right now. Or we simply want to rush on to learn the whole practice so that we can check that off our list of things to do. The gaining idea is a major hindrance to developing skill in meditation.

As Suzuki Roshi said, “When a gaining idea arises in our practice, it is a sign that our practice is in trouble.” The reason for this is that we’ve actually incorporated our restless, grasping mind into our meditation practice. Our practice has been taken over by the mind that craves, yearns, and tries to appropriate results without following the path that leads to those results.

These attitudes of grasping, craving, and greedy hunger are the very things that cause us suffering in the first place. Because we suffer we want to meditate, because meditation is the antidote to craving and suffering. And then what happens? Our craving takes control of the meditation! It’s as if the antidote to the poison itself accidentally becomes contaminated with poison!

It’s useful if you learn to recognize this gaining idea, this notion that somehow your best interests will be served if you rush through the practice. That notion is false. Meditation is about letting go of grasping so that we can experience freedom. So start doing that now by deciding that you’ll pause where you are right now, and that you’ll explore the stages of the meditation practice and really get to know them before you move on to the next stage.

As part of that exploration come back to this section and read a bit more about the issues that can arise in this stage of the practice.

Yes¡¡¡I’ve recognized this gaining idea in my practice, because I’ve suffered so much, that I wanted results inmediately, I had a vague idea that this craving wasn’t good, and now I confirm that. Thanks.¡¡

maybe you’d like to correct the typo ‘letting got’ to ‘letting go’. It wouldn’t matter usually but letting go is kind of key.
cheers.

Duly noted and corrected. Thanks.

How do i know if i have the “gaining idea” mentality.

well i know i need realizations and clarity so i meditate a lot although i really try not to have any expectations when i meditate but even trying not to expect something is an expectation in itself…right? or is that too philosophical..

I am currently on winter break from college and i really want to learn how to meditate as fast as i can because i want to go to college fresh, calm and focused. Therefore, i actually meditate as much as i can per sitting and then sit down again when i feel like sitting again which is quite often…. usually my meditations last 20 minutes or so?
Do you suggest that its too much meditation and should be balanced with other activities?

During meditation i had this thought which i disregarded then that just like how to much medication is not good, too much meditation cannot be good..the saying too much of anything is never good..does that apply here?

“Trying” not to expect something is probably not a good way to think about what we’re aiming to do. Expecting something is a kind of grasping, akin to grasping something in your hand. Letting go of expectations is a form of, well, letting go, akin to relaxing your hand and thus releasing your grip. You don’t “try” to relax your hand. You just stop grasping.

The saying “too much of anything is never good” is rather tautological! Can we ever say that too much of something is good? The question is, how much meditation can you usefully do? At what point does your meditation practice start to have diminishing returns (which it always does, at some point)? And at what point does forcing yourself to meditate actually become counter-productive if you’re forcing yourself to do something that’s no longer benefiting you? Then again, on intensive retreats the crisis brought on by sitting to the point where meditation has become counterproductive (for example the mind is screaming at us to stop meditating) can actually push us to go deeper, by letting go of expectations that we never even knew existed.

so basically you mean just sit and meditate and the more effort you apply to meditation the deeper one can go.

That’s not at all what I said, and it’s not something I think is at all true. I think you may be seeing in my words what you want to see there, which suggests again that you have a “gaining idea.”

ok so i can kind of understand what you mean now. The reason why i felt to meditate so much even when its not pleasurable is because of impatience, wanting to have ‘blissful’ states, wanting to raise awareness very quickly without understanding that it takes time and patience.

i have been reading ‘mindfulness in plain english’ and he says that sitting through times you feel restless and frustrated are more beneficial and stepping stones or something to that sort.

Another reason why i want to meditate more is to “Just concentrate on developing more and more awareness” often i end up feeling i am not meditating enough or not doing it right and feel frustrated and discontent.

it sounds like a gaining idea to me, i think.

what do you think and suggest?

The thing is that blissful states come from a very deep letting go of grasping, so the harder you try, the more elusive true bliss becomes. You can sometimes generate a kind of excitement that may fool you into thinking it’s bliss, but it’s not the real thing.

Really it’s best not to be too concerned about whether your meditations are “good” of “bad.” I say that any sit you do is a good sit. Just patiently and persistently coming back to the practice is the main thing. Keep doing that, and everything gradually starts falling into place.

And Bhante G. is right — working patiently and kindly with difficult experiences can be very beneficial.

I’d suggest that you balance any mindfulness practice you’re doing with lovingkindness practice. This will help you be a bit gentler with yourself.

Hello, Bodhipaksa. Thank you kindly for your terrific website. Today was my 140th consecutive sitting. I’m proud of getting this far but am also finding I’m strangely nervous that I’m not going to keep the practice up. I don’t know why. I want to keep going for years to come. I’m getting a bit panicky about whether I’m cut out for meditation. Have been doing the Mindfulness of Breathing (all four stages, each for five minutes) preceded by 2-5 minutes of body mapping. I don’t seem very good at Mindfulness of Breathing. I think I’m improving, but not sure. I’ve never entered a state of absorption, for instance, and find it difficult to muster much interest in the breath. I did go to the beach a couple weeks ago and became absorbed in the sunlight on the water! Took that to be a sign of progress as that never happened prior to meditating. Just wish it would happen during a sitting. Is this normal for about five months’ practice? Won’t I get better? Appreciate your “metta” in advance — I’m sorry but am becoming nervous without knowing why! Thanks!

There’s no such thing as being “cut out” for meditation. The reason we need to do it is because our minds are noisy and unruly! You’re doing great to have sat for 140 consecutive days. That almost certain places you in the top 0.01% of meditators. Seriously.

Regarding the mindfulness of breathing, I don’t know if you’re using any guided meditations, but they can help. Reaching any state of absorption after just a few months could happen, but it’s much more likely not to, unless you’ve been on a retreat. There’s often a lot of work we have to do on our minds in daily life before we can experience jhana.

Have you been using my “I meditate every day” mantra? And as for signs of progress, it’s common not to notice them. If you’re practicing, you’re changing, though—even if you can’t yet see it.

Oh, and the nervousness: just treat that as another sensation to be mindful of. Drop the stories; notice the sensations in the body.

Bodhipaksa – Not to litter your comment box with my remarks, but thank you, first of all, for your encouraging words. These are welcome from an advanced practitioner. Second, I hadn’t tried the “I meditate every day” mantra or the idea of the guided meditation, but I will now. Thank you again sincerely for your reply; it’s most appreciated.

If this is litter, it’s of a very welcome kind. I’m happy that you find the site helpful, David.