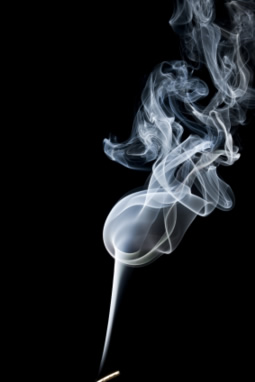 Obviously burning incense is not directly to do with posture, but there’s an indirect connection. As part of our preparation for meditation it’s common to settle down by going through some form of ceremonial ritual.

Rituals can be very simple of very complex. One of the most common forms of ritual action is to light incense. It’s best if this is done mindfully. First one lights candles, and then the end of a stick of incense is lit in the candle flame. Usually we let the end of the incense burn with a flame for a few seconds, and then the incense is gently waved in the air. This has the effect both of extinguishing the flame so that the incense is now glowing as an ember rather than as a flame, and of sending a stream of smoke into the air. Some people will then bow before sitting for meditation.

I’ve always found that the choice of incense is important. Certain kinds of incense can produce a very calming effect, and we can very quickly build up positive associations with a particular scent, so that the mind becomes quiet and a retreat-like atmosphere settles around us.

The more refined the incense is, the more likely it is that it will have a positive emotional and mental effect. Japanese incense is generally more refined (and in fact the world of Japanese incense is like the world of wine, with a great variety of qualities ranging from merely good to connoisseur-level). Indian incense can be more rough and chemical-smelling. Tibetan incense is more natural, and although some is refined much of it is like a fire on a hillside. That’s my experience; your mileage may vary.

The following is adapted from a press-release from Johns Hopkins University. It explains how certain kinds of incense have an effect on the brain.

Many religious traditions have contended for that burning incense is good for the soul. Now, biologists have learned that it is good for our brains too. An international team of scientists, including researchers from Johns Hopkins University and the Hebrew University in Jerusalem, describe how burning frankincense (resin from the Boswellia plant) activates poorly understood ion channels in the brain to alleviate anxiety or depression. This suggests that an entirely new class of depression and anxiety drugs might be right under our noses.

“In spite of information stemming from ancient texts, constituents of Bosweilla had not been investigated for psychoactivity,” said Raphael Mechoulam, one of the research study’s co-authors. “We found that incensole acetate, a Boswellia resin constituent, when tested in mice lowers anxiety and causes antidepressive-like behavior. Apparently, most present day worshipers assume that incense burning has only a symbolic meaning.”

To determine incense’s psychoactive effects, the researchers administered incensole acetate to mice. They found that the compound significantly affected areas in brain areas known to be involved in emotions as well as in nerve circuits that are affected by current anxiety and depression drugs. Specifically, incensole acetate activated a protein called TRPV3, which is present in mammalian brains and also known to play a role in the perception of warmth of the skin. When mice bred without this protein were exposed to incensole acetate, the compound had no effect on their brains.

Gerald Weissmann, M.D., Editor-in-Chief of The FASEB Journal, said, “Studies of how those psychoactive drugs work have helped us understand modern neurobiology. The discovery of how incensole acetate, purified from frankincense, works on specific targets in the brain should also help us understand diseases of the nervous system. This study also provides a biological explanation for millennia-old spiritual practices that have persisted across time, distance, culture, language, and religion–burning incense really does make you feel warm and tingly all over!”