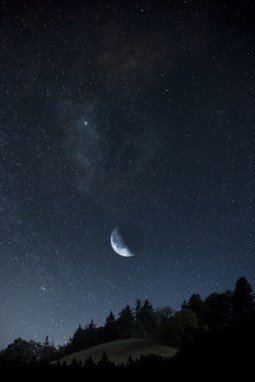 Space: it’s a strange and different element. It’s just there. We can’t see it, we can’t touch it, we can’t say how far it extends. We can’t even say what, if anything, it’s made of.

According to Einstein it expands and contracts depending on what velocity we’re moving at, and it gets bent out of shape by the presence of solid matter. That’s all very hard for me to get my brain — conditioned as it is to think in a paltry three dimensions — around. But there is one thing that my deluded mind “knows” about Space, which is that there’s Space that’s “me” and there’s Space that’s “not me.”

Cue Einstein, in one of his less mathematical and more religious moments:

A human being is part of a whole, called by us the “Universe” —a part limited in time and space. He experiences himself, his thoughts, and feelings, as something separated from the rest—a kind of optical delusion of his consciousness.

This very basic distinction — or delusion — of there being an inner world and an outer world is so fundamental that we rarely question it. This stage of the Six Element practice gives us an opportunity to question that assumption.

So first of all, as we’re sitting with our eyes closed in meditation, can we feel any sharp division between “me space” and “not-me space”? I’ve noticed that without the “optical delusion” of there being a delineation between inner and outer the body loses its sense of having fixed boundaries. The hands no longer have five fingers, and have become just a mass of interwoven sensations — tingling, warmth, pressure. The whole body becomes a fuzzy ball of energy. That passing car I hear: is the sound inside me or outside? The sound waves are happening in the air outside, but all hearing takes place in the brain, which is inside. The assumptions begin to show cracks.

Anyway, even if the boundaries of my space are fuzzy, I at least still have some space I can claim as my own, right? Well, maybe not. Even when I’m sitting absolutely still I’m moving. The planet is spinning on its axis and revolving around the sun, the whole solar system is swinging around the galactic core, and the galaxy itself is rushing away from every other galaxy at an incomprehensible velocity. So although I think there’s a “me space,” I’m never actually in the same space for two consecutive moments.

Space isn’t really divided into “me space” and “not-me space.” It’s all one space, and it flows through us. Space is just borrowed. We can’t own it. (Note to so-called “self”: try to remember this next time someone steals “your” parking space.)

wow i love thinking about these kinds of things, and the part about sound, it made me think alot about the question ‘if a tree falls in the forest and no one is around to hear it, does it make a noise?’ Before my answer was yes of course it does, but now my answer is no. Golly, i wonder what kinds of other assumptions are wrong like that, or was i right when i answered yes to the question ^ ? lol i love thinking about this kind of stuff :D

Reflection is mind-expanding, isn’t it? If we think it through, what kind of universe would exist if there were no sentient life to perceive it?

I like your website. I just got out of jail in Berkshire County. I spent my last 5 mos in Howard Street. I am now at Soldiers On in Northampton. It is a home for homeless Vets.I am on probation for 16 more months. When I went to jail I started meditating. I did it everyday. Sometime for a few hours a day sometimes less.I meditate in the sitting position because of knee problems but aquired some deep meditations. I am still doing it. It helped me alot. I am now interested in finding some type of Buddist Commune where I can volunteer, live,study and meditate. I thought you might be able to steert me in the right direction.

I don’t know of any Buddhist community like you’re thinking of joining. There are places like the Insight Meditation Society in Barre, Mass., who take on volunteer residents, but I don’t know what the process is, and it’s definitely not specifically for former inmates (and I don’t know what their policy on that is). You can Google them and make contact.

Sorry I can’t be of more help.

I love this. It reminded me of an experience I had when I was about 15. I was at the lake in August. It was a very warm muggy night and the lake was warm like bathwater. It was very late and I was alone and I took off my clothes to swim. In the water floating on my back… the lake was very calm and still. The sky was very black and the stars were bright and sparkling and were reflected in the still lake. With no clothes on and the warm water and warm air… dark sparkling above and around… and ears underwater-I couldnt feel anything at all. It was like floating in outer space and sort of like I had no body but a the same time everything was my body. This was one of the most memorable moments of my life and really changed how I looked at the world and myself. I have always wished for more moments like that.

Hi Sabra,
That sounded like a great expierience you had.I am looking forward to some of the same when the weather warms up.Thank you for sharing it with me.
Frank

Meditate on space often enough you will notice that the space within is the same without. The dualistic projecting mind is suffused within that space and projection has no place to go. Basically the inner and outer distinction falls apart and you realize that all the objects that appear in that space or more profoundly from that space is that activity oc consciousness. Hence realising that the whole universe is conscious space…awareness, big mind….whatever name you want to give….amazing..

Thanks for this Bodhipaksa.I often contemplate the idea of space and that in space there is no up or down. So that there can be no left or right either or for that matter front or back. No up,down,left,right,front or back. So therefore no inside or outside. Which just seems to leave ‘me’ with the entire universe flowing through.