April 20, 2015
Bodhipaksa
on practice
No Comments 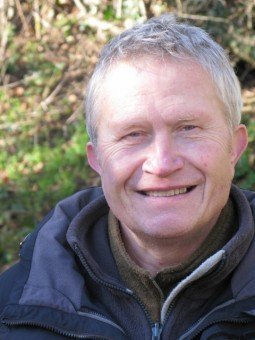 I just wanted to flag up that in late May and June my friend Harshaprabha of the Triratna Buddhist Order will be offering the opportunity to meet with like-minded people in Goderich, Guelph and Sudbury, Ontario.

He has planned a diverse set of events, ones which he believes will meet the expectations of those living in those places.
This is the first of his 2015 visits and one he is particularly looking forward to; not just meeting old and potentially new friends but the first time he has put on events in Sudbury.

Harshaprabha lives in the UK but has family ties to Ontario. He’s visited the province many times over the years in order to promote the practice of Buddhism.

I am sure you will receive a warm welcome by him and enjoy being introduced to meditation, practicing it and then hear about a particular Buddhist topic.

Meditation in Guelph and Goderich, Ontario 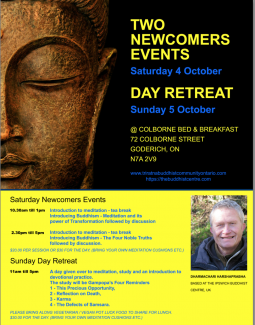 Harshaprabha is making the second of his twice yearly visits to Ontario. The events, in Guelph and Goderich, are suitable for those with an understanding of, or even just a curiosity about, Buddhism.

Harshaprabha’s dream is to see the Triratna Buddhist Community established in the Province.

To realize this dream he makes bi-annual trips and leads events for newcomers and others. These give people an opportunity to experience being with other like-minded people in meditation and in discussing Buddhism as interpreted by the founder Urgyen Sangharakshita and his disciples.
In between his visits Harshaprabha keeps up his connections via e-mail, Skype, telephone, and Facebook. His dream is to be doing this work full time.

Details of the Ontario events are in the attached e-flyers. 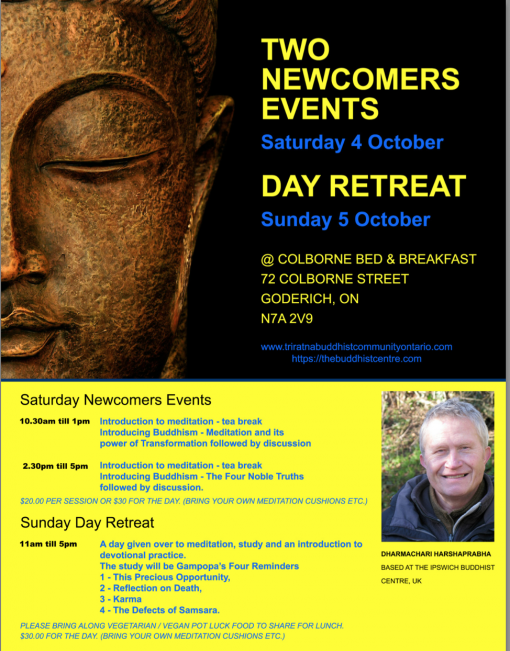 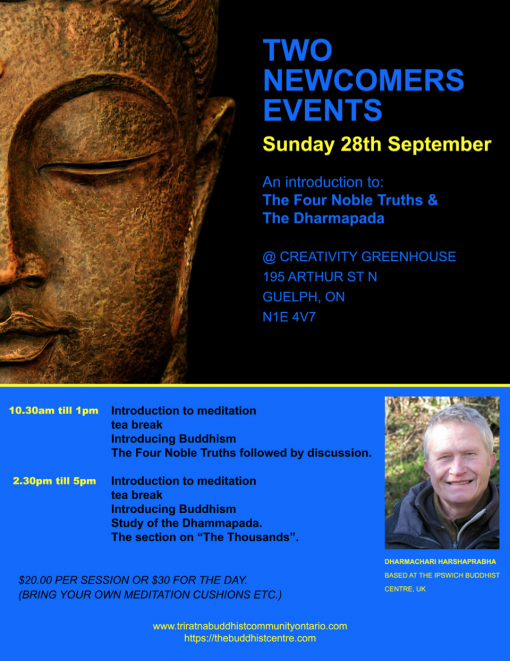 Harshaprabha was ordained in 1982 in Tuscany, Italy, was a founding member of The Buddhist Hospice Trust. He ran a Buddhist Right Livelihood business called Octagon Architects + Designers for 21 years and was instrumental in setting up the Colchester Buddhist Centre, Essex, UK. He now co-leads a newcomers evening every week, facilitates a weekly Men’s Group, gives talks, and supports retreats at the Ipswich Buddhist Centre, Suffolk, UK.

Raymond was centre of Buddhism movement in Canada

Raymond was the centre of the Canadian Buddhist movement after the Second World War, according to University of Lethbridge religious studies professor John Harding, whose upcoming work will focus on the modernization of Buddhism from a global perspective.

He underscored the local connection during a recent presentation to an audience of about 30 people at the Galt Museum, coinciding with the museum’s Religion in the Bible Belt exhibit.

The first Buddhists moved to Canada from Japan in 1905…

John Alex Murphy, The Province: This past week’s Mindfulness meditation introduced a new way of dealing with difficult thoughts that was radically different and initially quite disconcerting for me.

I should initially mention that this past long-weekend, my family and I went on our first 3-day backpacking trip together in Skagit Valley Provincial Park, a spectacular mountain wilderness area about 200 kilometers east of Vancouver. It’s a beautiful place to spend time in nature. As it turned out, it’s also an exquisite place to meditate.

I was excited to start another new week of my eight-week Mindfulness course. So at the end of our …

For over a decade, Sister Elaine MacInnes has struggled to raise enough funds to keep her small charity, which offers meditation and yoga to inmates, afloat.

Freeing the Human Spirit has faced an uphill battle since MacInnes first started it in 2001, when Ottawa bureaucrats initially told her there was no place for her in the correctional system.

MacInnes didn’t take no for an answer, creating her own spot in the prison system by contacting local prison officials and convincing them of the program’s merits one at a time. She and volunteers are quick to tout the program, saying it’s been able to expand …

Now 34 and a veteran of five Winter Olympics, Wickenheiser has shifted away from the heavier weights she lifted in her younger days. She focuses more on functional strength training now, still does regular yoga sessions and has kept making improvements to adjust to the more speed-focused style on the ice.

Wickenheiser also recently added meditation into the mix and it has made an immediate impact.

Meditation finds an ommm in the office

Wallace Immen, the Globe and Mail: Not long ago, a CEO who openly practised meditation in the office might be considered weird, and a manager who urged employees to train their minds to be more self-aware on the job would be suspect.

But that’s changed. A slew of books published this year promote meditation for self-awareness as an aid to decision-making and leadership.

Last fall, Kira Leskew found herself screaming on the phone to a supplier who’d failed to …

Matt Gardner, Prince Albert Daily Herald: The idea of Christian Meditation might seem firmly rooted in traditional, even archaic, notions of spirituality and healing. But looks can be deceiving.

Facilitating an introductory session on the topic Tuesday evening at the John M. Cuelenaere Public Library, retired teacher/librarian Sheila Soulier used the technological advances of modern science to illustrate the benefits of meditation.

Mindfulness meditation as a way to heal and cope with cancer

When it comes to cancer, stress can be a cause and effect; reducing it is a big part of both the prevention and the treatment of illness.

Mindfulness meditation, the practice of clearing the mind through deep breathing exercises, is becoming an increasingly widespread part of healing and coping with cancer.

Dr. Miroslava Lhotsky, one of the facilitators of Mindfulness Meditation Toronto, is a physician who spent years delivering bad news to women whose mammograms had revealed breast cancer.

Meditation in the classroom, the new approach to ’emotional learning’

Canadian schools in forefront of adding psychology to the curriculum

Richard Handler, CBC News: As kids head back to school in September, some will find their teachers focusing not just on developing their intellects but also their “mental brawn,” to help adolescent brains cope better with today’s digitalized world.

It seems that as our modern-day culture grows more frenzied, some schools at least are trying to redesign education so kids can be better equipped to function amid the constant bombardment of media messages and gadgets with all their maddening stimuli.

Already students from kindergarten to Grade 8 in Vancouver, and in nearly 175 schools in …