Cuddly robot monk is here to answer your questions on Buddhism!

Daniel Paul, Shanghaiist: The future has landed in the form of a chubby robot monk unveiled at Beijing’s Dragon Spring Temple earlier this week. Developed with the help of artificial intelligence experts, “Xian’er” is able to sense his surroundings and answer deep questions about Buddhism.

He is already known as the young and affable main protagonist of an animated cartoon series developed by Ã¯Â»Â¿Longquan Comic and Animation Group. The short stories he stars in are created by monks and volunteers and dispense little nuggets of Buddhist wisdom in an easy to understand and relatable way.

Their aim is to engage with new and contemporary …

Irish Archaeology: A remarkable study carried out recently in the Netherlands has revealed that a Chinese’s Buddha statue actually contains the remains of a mummified monk. The statue dates from c. 1050-1150 AD and is believed to hold the body of a Chinese Buddhist master, Liuquan.

The study of the mummy was carried out under the supervision of Erik Bruijn, an expert in the field of Buddhist art and culture and guest curator at the World Museum in Rotterdam. He was aided by a team of medics including Reinoud Vermeijeden, a …

Yu Zhengsheng, a senior leader of the ruling Communist Party of China, said in his talks with Buddhist monks and religious officials during his current tour of Tibet, “Dalai Lama’s so-called “high-degree of…

China has renewed calls to fight the Dalai Lama

Harold Mandel, Examiner.com: The Dalai Lama’s hopes that Beijing’s policies would ease up in dealing with Tibet appear elusive at this time. Phayul.com reported on July 10, 2013, China renews calls for ‘absolute fight’ against the Dalai Lama. Yu Zhengsheng, who is China’s leading official in charge of religious groups and ethnic minorities, has called for an “absolute fight” against His Holiness the Dalai Lama.

Yu Zhengsheng has taken the position that the Dalai Lama’s demands for genuine autonomy for Tibet are in direct conflict with China’s constitution. These comments were made by Yu Zhengsheng, who is number four in the ruling Communist party’s hierarchy…

Harold Mandel, Examiner.com: There has been an intensification of negative feelings among activists worldwide in dealing with China’s policies ever since Tibetans began self-immolating in protest of Chinese rule over the years. Phayul.com reported on May 18, 2013, ‘West must unite against China’s bullying.’ Prominent journalist Edward Lucas has written a hard-hitting article which advocates for democratic governments in the West to unite in resisting “Chinese bullying” against those who meet with Tibet’s exiled leaders.

Lucas, who is International Editor of The Economist, has argued in his article, “The Tibetan Test,” which has been published online by European Voice, that Chinese bullying is working and that…

Tibet issue is raised by France with China

Examiner.com: On April 26, 2013, the Central Tibetan Administration reported, France Raises Tibet Issue with China. French President Francois Hollande has said he raised the issue of Tibet during his talks with the new leadership in China. The situation in Tibet has been becoming increasingly tragic as 117 Tibetans have set themselves on fire to protest against the Chinese government’s repressive policies in Tibet.

The Tibetan self-immolators have been calling for the return of His Holiness the Dalai Lama to Tibet and freedom for Tibetans. President Hollande, who has been on a visit to China, told a press conference that during his talks with Chinese…

“Journeys on the Silk Road” by Joyce Morgan and Conrad Walters 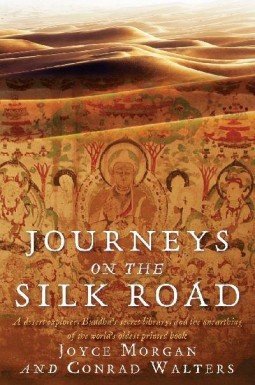 Marc Aurel Stein was a superstar of his time. When he returned from the Taklamakan and Gobi desert in central Asia after a successful expedition that lasted from 1906 to 1908, weighed down with treasure in the form of ancient documents, the newspapers in London were full of his exploits. Today, almost nobody has heard of him. I certainly hadn’t until I read Journeys on the Silk Road by Joyce Morgan and Conrad Walters. Morgan and Walters have travelled from their native Australia to England, Wales, India and China in order to retell Stein’s story and that of the document most associated with his explorations: the Diamond Sutra from the Caves of the Thousand Buddhas — the oldest printed and dated document in the world.

The book can be read from a number of different points of view. One such perspective is the insight into the last hurrah of colonial exploration, which Morgan and Walters call The Great Race. The first third of the book introduces us to a Stein who is always looking over his shoulder looking for signs of his French, German and Russian rivals, as he struggles first with bureaucracy and then with the desert to reach his goal before they do. He has heard rumours of a store of ancient texts in a long-forgotten waypoint on the Silk Road, and wants to claim them for his adopted England (Stein is Hungarian-born but became a citizen of the United Kingdom). Stein’s ambition and single-mindedness typify the attitude of the Western powers of that time towards the cultural heritage of the rest of the world.

Another way to read the book is as a story of Stein, the man. But we are only offered glimpses of him. He is somebody who lived for the adventure of travel, competition and discovery. He was meticulous in his preparations, dapper in his appearance, frugal in his lifestyle, but prone to taking unnecessary risks with his own life and the lives of those in his pay. He wrote an enormous number of letters and multi-volume books recounting his expeditions, but he seems to have hidden himself behind an official language of reserve and distance. For example, on the return leg of the Diamond Sutra expedition, he lost a number of toes due to frostbite (the result of an unplanned detour up a snowy peak). His letters from his sick-bed were written with a stiff upper lip that would have impressed any natural-born Englishman, but there are indications from other sources of a deep and lasting suffering on Stein’s part. Another example of his tendency to whitewash is the fact that he never wrote of his fourth and failed expedition to the Chinese desert. In many ways it would have been more interesting for its depiction of the changing times and the end of the Great Race, but for Stein it was something to be hidden from view. Stein was a lifelong bachelor, and although he struck up some important friendships with men he worked with, there is no insight into whether those relationships were built on anything other than a shared interest in adventure.

One issue occurs to the reader before the authors eventually explicitly deal with it — the ethical considerations of what Stein and others like him were doing. In today’s China, he is remembered as a ignoble thief who bribed and cajoled the monk in charge of the Caves of the Thousand Buddhas until he got the documents he wanted. Note that Stein understood very little about the contents of what he discovered and it was ironically his French rival who was engaged to analyze the texts once they were back in London, that first appreciated the significance of the Diamond Sutra. But it could also be said that even if this was a typical cultural smash-and-grab of its time, the alternatives might have been worse. Once word of the find reached Beijing, those documents that remained behind were ordered to be sent to the capital. But they were inexpertly packed for their journey and fell foul of the dampness of the climate outside their desert cave home, as well as falling into the wrong hands as they made their long trip. If Stein was a thief, perhaps he was the right thief at the right time.

What we can say about him with some amount of confidence is that he was a fascinating if not always very likeable person who seems to have been driven by a thirst for adventure and a desire for recognition.

A third key to this book is the Diamond Sutra itself. Each chapter in the book begins with a quote from this Buddhist text — a nice idea, but in the end it felt a bit contrived as I didn’t see how the quotes had an immediate relevance to the contents of the chapters. However, the history and significance of the Diamond Sutra are dealt with well, and would certainly provided a good overview to a reader (like me) who has very little knowledge of Buddhist scripture. The authors look into the distant past with a discussion of how the script might have come to be in the caves and the historic figures associated with it. And they zoom forward to the present day, describing how the Sutra is being preserved and digitized, and even going so far as to interview the 14th Dalai Lama on the contents and importance of the Diamond Sutra.

The Diamond Sutra famously ends with a verse about impermanence:

All conditioned dharmas
Are like dreams, illusions, bubbles, or shadows;
Like drops of dew, or flashes of lightning;
Thusly should they be contemplated.

Morgan and Walters point out the positive irony in the fact that a document that teaches impermanence has survived so long, against so many odds, and is now safer than ever and available to the world through the internet.

In summary, the book was not what I was expecting. I had ideas of fast-paced adventure and breathless story-telling. But Stein was no Indiana Jones, and the book itself is not written in a style that sweeps the reader along. The subject, however is undeniably fascinating and the book is well researched. The authors don’t intrude with their judgements on Stein and his times, but instead outline the facts, present the various arguments, and allow the reader to draw their own conclusions. I recommend it to readers interested in the historic context and also to those intrigued by the Diamond Sutra itself.

Xu Zhiyong, New York Times: Around noon on Feb. 19, an 18-year-old named Nangdrol set himself on fire near the Zamthang Monastery in the northeast Tibetan town of Barma. In a note left behind, he wrote, “I am going to set myself on fire for the benefit of all Tibetans.” Referring to China’s ethnic Han majority as “devils,” he added, “It is impossible to live under their evil law, impossible to bear this torture that leaves no scars.”

Over the last three years, close to 100 Tibetan monks and laypeople have set themselves on fire; 30 people did so between Nov. 4 and Dec. 3. The Chinese government …

Thomas Fuller, New York Times: Security forces in Myanmar mounted a violent raid on Thursday against Buddhist monks and villagers who have been protesting the expansion of a copper mine. The crackdown was the largest since the civilian government of President Thein Sein came to power 20 months ago.

Witnesses said dozens of monks and other protesters were injured when the security forces used incendiary devices that set fire to protesters’ encampments outside the offices of the Chinese company in charge of the project. The company has a partnership with the powerful military in Myanmar, formerly Burma.

From the ashes, Tibetan Buddhism rises in the Forbidden City

On a freezing Tuesday this week, dozens of special guests from China’s cultural, political and business elites gathered within the blood-red walls of the Forbidden City. They were there for the opening of the newly restored Hall of Rectitude, the center of Tibetan Buddhism during China’s last imperial dynasty, the Qing.

After a fire in 1923, the hall and about a half-dozen surrounding buildings that comprise the Buddhist architectural complex lay in ruin for nearly a century in the northwestern corner of the 8,000-room former imperial palace.