Pat Robertson on Buddhism as a “disease”

Christian Broadcasting Network host Pat Robertson suggested to viewers on Monday that Buddhism was like a “disease” and that a Christian could get “infected” if their coworkers practiced it.

“I work in an environment where all of my coworkers are Buddhists,” a viewer named Tina explained in an email. “They talk about Buddhism all day long and try to preach to me. It didn’t matter much to be before, but since I recommitted myself to Jesus a year ago, it has started to bother me a lot.”

Robertson replied by noting that “healthy” people might not contract a “mild contagion.”

Does Hawaii represent the future of religion in the US? 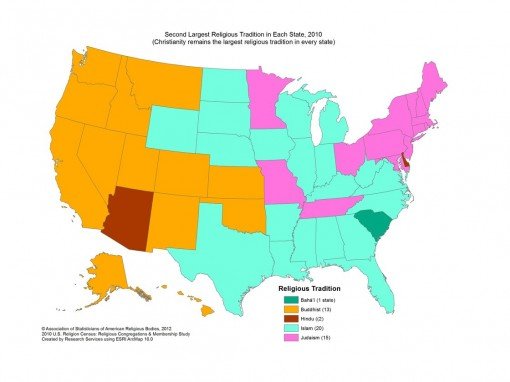 This fascinating map from the Association of Statisticians of American Religious Bodies (click to enlarge) shows the second largest religious tradition in each of the states of the US. Buddhism is in second place in 13 states. Hawaii, with a large population of Japanese descent, perhaps isn’t a surprise. California is perhaps incapable of giving surprises. Alaska? I did not see that coming.

Of course it probably doesn’t take much for a religion to be in second place in the US. Christianity, as you’d expect, is the majority religion in every state. Another resource shows that the percentage of the population identifies as Buddhist in each of these states is in the order of 1% … 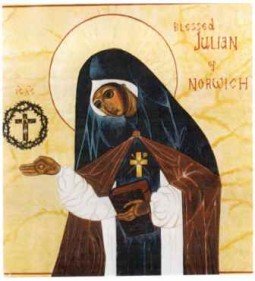 Meditation practice can reduce, but doesn’t erase, anxiety. In fact meditating makes us more sensitive to what’s going on within us, both emotionally and physically. When we meditate we feel more. Meditating can also lead to us being more present with those feelings, so rather than than avoid or bury them we experience them full-on. In these ways, meditation can cause …

Meditation experiences in Buddhism and Catholicism

Susan Stabile, OUP Blog: Becoming a Tibetan Buddhist nun is not a typical life choice for a child of an Italian Catholic police officer from Brooklyn, New York. Nevertheless, in February of 1988 I knelt in front of the Dalai Lama in Dharamsala, India, as he cut a few locks of my hair (the rest had already been shaved), symbolizing my renunciation of lay life.

I lived in the vows of a Buddhist nun for a year, in the course of spending two years living in Buddhist monasteries in Nepal and India. Including my years of lay practice, I spent twenty years of my …

Three faculty members from the University of Redlands in Redlands, California — Fran Grace, professor of Religion, Lisa Olson, associate professor of Biology, and Celine Ko, assistant professor of Psychology — have received a grant of $5,000 to fund research on the “Impact of Meditation Curriculum on Physiological and Psychosocial Stress, Well-Being, and Correlates of Academic Success.”

The grant will allow faculty members to explore the relationship between meditation, and the physical and psychological side effects of stress.

The grant was awarded by The Trust for the Meditation Process.

The research project will focus on studying previous observations from Professor Fran Grace’s meditation-based Seminar on Compassion in the Religious Studies department. The research demonstrated …

Law professor to speak about Buddhist meditation and Christian spirituality

The lecture is sponsored by the Jay Phillips Center for Interfaith Learning and is free and open to the public.

Drawing from her book “Growing in Love and Wisdom: Tibetan Buddhist Sources for Christian Meditation,” published this month by Oxford University Press, Stabile will explore common values that underlie Christianity and Buddhism and how interreligious engagement can offer mutual enrichment for people of both traditions, giving special attention to how Buddhist meditation practices can enrich Christian spirituality.

After the program, Stabile’s …

Director of Zen temple in harmony with her Jewish roots

Rebecca Rosen Lum, J-Weekly: As someone who has maintained a vital connection to her Jewish faith even as her Buddhist practice has deepened, Tova Green says the two traditions share some basic tenets.

An awareness of the preciousness of life.

The necessity of living an ethical life.

A sense of interconnectedness.

Also, she adds, “there are practices that are mutually enriching.”

Green is the director of the San Francisco Zen Center’s Beginner’s Mind Temple (also known as City Center), a post she has held since April 2011. The temple is a Soto Zen training center open to the general public.

Bill Sherman, Tulsa World: A dozen people sang a prayer of invocation and then sat for 20 minutes of silent meditation in a round, sunken prayer room at the Osage Forest of Peace retreat center.
A bell chimed to end the meditation. They rose, bowed and sang another prayer.

It was a ritual repeated three times a day, every day, at the center, an interfaith contemplative community on 43 wooded acres four miles west of Sand Springs.

Osage Forest of Peace was founded more than 30 years ago as a Catholic Benedictine monastery by Sister Pascaline Coff, who modeled it after an ashram in India that … 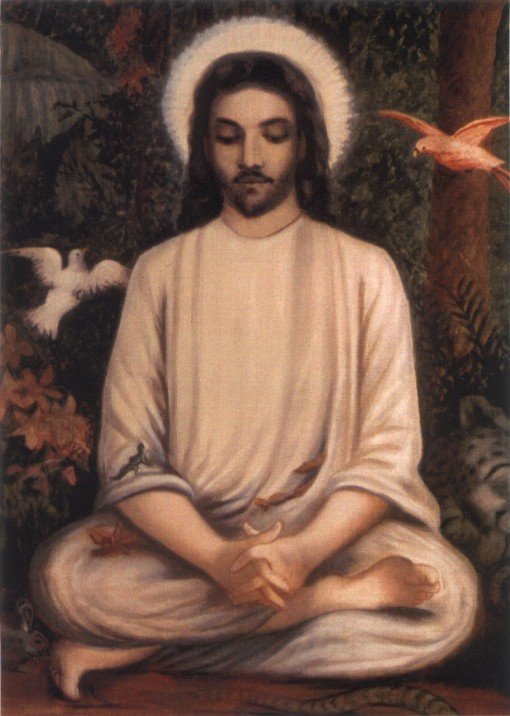 Somewhere on the web I came across this interesting rendition of Jesus sitting in meditation posture.

I’m normally turned off by modern pictures of Christ, either because of the crucifixion aspect, or the general sappy vibe that a lot of them have, but I rather like this.

Update: Thanks to Steven (see below) I now know that this image comes from the Old Temple of the Vedanta Society of Northern California.

According to Vedanta Press:

The story goes that Sw. Trigunatita had a dream or vision of Jesus Christ and asked one of his disciples to paint it according to the scene he remembered. The result is a classic painting of value not

The Meditative Mind, by Daniel Goleman 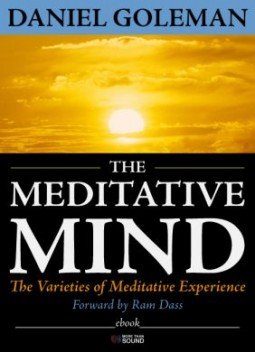 The Meditative Mind is an updated version of a book Daniel Goleman first published in the 1970s and revised in the 1980s. Goleman, who’s famous for his classic, Emotional Intelligence, was in on the first wave of research into the effects of meditation, having made a visit to India and having met some impressive yogis before returning to Harvard. Goleman has been ahead of the curve for a long time. This earlier parts of this book, he points out, first appeared at a time when the links between traditional Asian systems of mental training and modern psychological science were few and far between. They are of course far more common now, with an explosion …