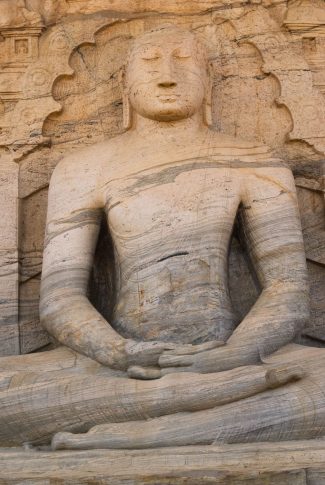 I’ve taken two extracts from the Buddha’s discourse on the Mindfulness of Breathing to illustrate some of the traditional approaches to this meditation practice.

This teaching, or sutta, is called “Anapanasati”, which literally means, “Mindfulness of in-and-out breathing.”

It’s a very pithy guide to the meditation practice, and you could literally spend a lifetime exploring the teachings that the Buddha outlines here. You could certainly write a whole book about it, and in fact Larry Rosenberg on the Cambridge Insight Meditation Center has done just that — his book is called “Breath by Breath.”

The first extract is part of the sutta’s preamble, which gives the background to the teaching, which was given at the end of the rainy season retreat. India is very wet for four months of the year, and the monks developed the habit of using this time as a period when they would meditate more intensively than usual.

This particular retreat period was going so well, that the Buddha decided that he would remain where he was for another full month. It seems there were already a lot of monks there, and that the retreat was focused heavily on meditation teaching. The Buddha’s announcement that he’d be staying at this particular place for longer caused many more monks to arrive. We’re told that,

So the retreat was paying off!

We see here a very active, dynamic spiritual community, which in effect offered a series of ongoing spiritual workshops.

We think of Buddhist monks as living in monasteries, but in those days they tended to wander a lot, only staying put for long periods during the rainy season, which was a time for retreats. The events being described may well have taken place during the rains.

Within a few centuries after the Buddha’s death monks began to live full-time in monasteries. You might think of monasteries as places for meditation, but increasingly they became centers for administration and for the preservation of the scriptures (which at first were oral, but were then written down on leaves, which had to be recopied regularly). One Buddhist commentator wrote a long treatise on how it was essentially impossible to meditate in a monastery! To meditate, you had to get away to a small hermitage or cave someplace further away from civilization.

Even at the time of the Buddha there was a division of labor for monks into those that preserved the teachings and those that meditated intensively, but one of the main purposes of being a monk (or nun) was to allow for intense spiritual practice of the type being described.