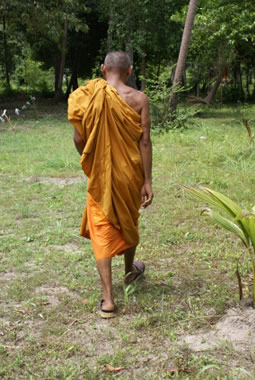 Walking meditation is one of the most widespread forms of Buddhist practice, and has the advantage that it can be done anytime we’re walking. It’s sometimes used as a way to break up periods of sitting meditation, giving the body a rest, but is frequently done as a meditation practice in its own right.

Anything we do can become meditative, including eating, driving, washing, cleaning the house, and, of course, walking. Historically, Buddhist monks in India would make walking an important part of their daily practice, remaining mindful as they walked around performing the daily tasks of life such as fetching water or going to the bathroom, as well as when on the alms round as they begged for food by going from door to door, and as they simply walked from one place to another as they crossed the country. It was natural for them to make the simple act of walking into an opportunity to develop mindfulness and lovingkindness.

There are many forms of walking meditation, and I’ve done two different kinds taken from Zen traditions and one from Theravadin Buddhism. The main form I’m going to teach here has the advantage that it doesn’t require that you walk particularly slowly, meaning that you can do it while walking in a park or even in your local high street without drawing attention to yourself.

Walking meditation is perhaps the form of meditation that’s most amenable to the on-the-go modern lifestyle. Many people find it hard to set aside time to sit, but just about everyone does some walking, even if it’s just a trip to the grocery store. And since most of us don’t get enough exercise, walking meditation gives us the opportunity to keep both the body and mind healthy.

Walking meditation can be a lot of fun. It helps us to enjoy the experience of having a body, and can be very sensuous and immensely pleasurable.

I want everyday on my 15 minute break at work. During this time I would like to know how to walk and meditate.

15 minutes is a nice time to do walking meditation. At the risk of sounding shamelessly self-promotional I’d suggest getting hold of my CD, “Guided Meditations for Calmness, Awareness, and Love,” which includes a guided walking meditation. Being guided through the practice is how I learned it, and I think it’s the most effective way to learn since there’s a voice to bring you back when you get distracted.

The guided meditation on the CD is a bit longer than the 15 minutes you have available, but you could always either use the recording to help you get the hang of the practice and then “fly solo” (i.e. do the practice without the aid of the CD) or you could use the recording but fast-forward a bit in the middle — I do think the ending is important. I hope this helps.

I,ve tried out meditation following lessons from the net and it really is
yielding results. however i wan,t to find out how i can use meditation to achieve my long time goal as well how i can get any buddhist literature that may help spiritually uplift me.

There’s a ton of Buddhist literature available on the internet. I’d highly recommend Access to Insight, which contains a large number of Buddhist Suttas (teachings), and Free Buddhist Audio, which despite the name offers not just audio but many transcripts of talks and seminars.

Is there a walking meditation guide file I can purchase and download through this website, or can anyone recommend where? Thank you.

Yes, there’s a walking meditation MP3 available through our store.

Years ago I came across an article in the newspaper about monks who had marked on the ground a large (two-tennis court size) circle that spiralled in to the centre. The idea is to walk in-between the lines following the path to the centre thus allowing the individual to meditate and possibly other acquirements. This is somewhere in England but I don’t know where. Members of the public can also walk it. Does anyone know of this or anything like it and what is its functions exactly?

These are called labyrinths and they’re found in many cathedrals dating back to medieval times. The Wikipedia article on labyrinths mentions examples in Willen Park in Milton Keynes, Tapton Park in Chesterfield, and Old Swedes Church in Wilmington — although I’ve no way of knowing if any of these is the one you read about. I’ve only walked a labyrinth once, and the walkway acted as an effective tool for helping keep the mind focused on the act of walking. When walking along a conventional path it’s much easier to let the mind wander. Here’s a link to a photograph of the labyrinth at Chartres.

Thank you Bodhipaksa. Your reply has put me on the path. Labyrinth is the word and from there I can go further with my investigation starting with the places you mentioned.

May I say how astonished I am at the wealth of information and wisdom I come across on the net when I use it to find out things. I have always found spiritual growth a lonely journey of unchartered waters but now I see I am merely treading in the footsteps of others.

your site is very interesting.

Thank you for your helpful site. I am requesting permission to use your image of the monk walking in a book I am writing entitled Peace Fibres: Stitching a Soulful World. In it, I enlist the metaphor of fibre work for developing peace personally as well as politically. In each chapter I have exercises that include meditation practice. This photo would greatly complement these exercises.
Would you grant me permission to use this image? If so, what, if any, fee would be involved? I would, of course, credit your site as the source of the image.
Thank you for considering my request. I look forward to your response.
Sincerely,
Karen Lohn

I’m afraid the permission isn’t ours to give. We purchase most of our pictures from istockphoto.com, and it’s likely that the photograph is from there, although I can’t be sure.

Thank you for considering… I will pursue it elsewhere.
Peace to you,
Karen

I don’t know if you looked on istockphoto, but I found it there easily: https://www.istockphoto.com/stock-photo-4673291-buddhist-monk.php

Hello,
I hope this question is not too dumb. You said ‘The main form I’m going to teach here’, but the text just ends without the lesson. Where is the ‘here’ that you are referring to? Is it the CD that you are selling?
Many thanks.
Paul.

Look at the links down the left side of the page. The walking meditation instructions are broken up for easier reading.

Reply
Yes, the Internet Is Changing Your Brain — CYBERZOO interactive
October 4, 2010 11:31 am

[…] do this every morning. If the weather’s nice, I’ll go out into the garden and practise walking meditation, but the practice is essentially the same: using samatha (concentration) to calm the monkey mind […]

[…] our regular Wednesday evening meditation sessions at Seeds for Happiness). To find out more, go to https://www.wildmind.org/walking or to https://www.knowbuddhism.info/2009/02/walking-meditation-buddhadasa-bhikkhus.html. If you […]

I have been stumbling around this page (and the one before it) with the same problem. I was getting ready to give up and move on to another page when I saw your comment.

Not only did your question answer mine, it also reminded me not to judge myself so harshly (I was feeling awfully stupid).

Now I’m off to learn some walking meditation to complement my walk to the store!

I’m sorry for the navigational confusion! If we can make the site more intuitive, we’ll do so.

[…] is a site with detailed information on different meditation practices. The section on walking meditation describes four “stages.” They’re not really separate, though. In reality, we […]

i am practicing meditation and walking together since 2 months . i am concentrating “om” word repeatedly in mind during walking. it gave me best feeling during and after walking. i want someone else’s opinion.

That sounds good to me, Dr. Mavani.

[…] that it can be done anytime we’re walking. Learn more about the Walking meditation here on the Wild Mind […]

This morning I dowloaded your MP3 Walking Meditation, and went for a walk. It was wonderful – simple yet immediately effective. I honestly don’t think I’ve ever walked liked that before. I feel marvellous – very relaxed, yet senses sharpened. (Whoever has recorded the meditation has a lovely soothing voice, too!) I’m so pleased to have discovered your site, and plan to come back and explore in greater depth. (And no – I’m not an ad. – I’m a genuine customer!) Thank you for making this available …

Thank you, Marie. That’s my voice, incidentally. I’m glad the meditation was helpful.

Hello! Just wanted to say thanks for this wonderful article on walking meditation. It was an excellent review of the teachings I received in Thailand 25 years ago. Well done!

Bodhipaksa, do you know the name in Sanskrit of Walking Meditation?

I don’t know what the Sanskrit term is, but the Pali term, which will be similar, is “cankamana.”

[…] My throat was still scratchy so I sucked on Ricolas, I ate a small breakfast and I read. We did a walking meditation in the backyard led by Bodhipaksa. I felt strong, and in only mild discomfort from the gas pain, […]

Generally walking meditation, compared to mindfulness of breathing, gives some benefits that are the same and some that are different. Both practices will tend to still the mind. Mindfulness of breathing has the potential to bring about a deeper level of stillness, since the eyes are closed and there’s less activity and less sensory stimulation (usually you’ll have your eyes closed, for example). But walking meditation can bring about a very intense sense of being mindful of the body. Both are valuable.

I love walking and have noticed that whenever I walk I get the most productive ideas in my mind. I want to extend this state of my mind to other areas of life.