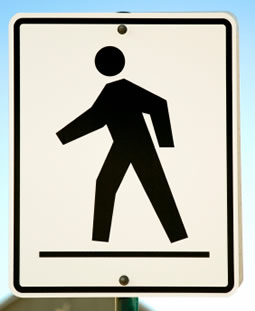 Some students have a sneaking suspicion that walking meditation is not really meditation at all, or that it’s perhaps a sort of watered down meditation. I think these suspicions are unfounded, and are probably based on the misconception that in order to do meditation you have to be sitting still.

This is probably a very similar misconception to the idea that you can only really meditate well in full lotus position. Both misconceptions are trying to define meditation in terms of what is happening outwardly, rather than in terms of what you are doing internally. Meditation is a process of developing greater awareness so that we can make changes to our consciousness so that we can be more deeply fulfilled, and have a greater understanding of life. It’s essentially an inner activity.

This might seem to be somewhat contradictory to all of the emphasis to have placed on having a good posture in meditation. But in emphasizing a good posture, all I am doing is encouraging you to set up the best possible conditions for developing greater awareness in order to achieve our desired goals of greater awareness, deeper fulfillment, and greater understanding.

The great thing about walking meditation is that you can do it anytime you are walking — even in the noise and bustle of a big city. In fact it’s especially good (even necessary) to do it in a big city, with all the distractions of people and noise, and shop windows tying to catch your attention. When I used to walk through the city center in Glasgow, Scotland, I often used to practice walking meditation. At first, it would be very difficult to keep my awareness involved with my walking. Artfully designed shop window displays and advertisements would be beckoning to me, and my eyes would involuntarily flick to the side as if afraid of missing anything. Attractive people would parade past, dressed in their most eye-catching clothes, and my neck would yearn to turn to squeeze every last moment of enjoyment out of the experience of seeing them. But soon, I began to feel increasingly comfortable keeping my eyes directed forwards.

I realized that there was a kind of battle going on. Advertisers and shop window designers were trying to capture some of my awareness, and I was trying to hold onto it. And when I began to realize that I was winning the battle, I would feel a surge of joy and exultation. I then realized that the normal state of distractedness in which I would normally walk down a busy street was deeply unsatisfactory. When your attention is constantly seeking satisfaction outside of yourself – through glancing at consumer goods or at attractive passers-by – then your internal experience becomes fragmented, as if you’re leaving parts of yourself strewn along the city streets. In this state of fragmentation, it is even harder to find sources of fulfillment within. This leads to a vicious cycle, where we feel increasingly hollow and fragmented as we seek fulfillment outside ourselves.

Practicing walking meditation is a way of “de-fragmenting” our minds. One of the literal meanings of the word “sati” (usually translated as “mindfulness”) is “recollection.” In practicing mindfulness we are “re-collecting” the fragmented parts of our psyches, and reintegrating them into a whole. As we become more whole, we become more contented and more fulfilled. This is one of the main benefits and aims of the practice of mindfulness.

I have found in walking meditation a tool to cope with unwanted and painful thoughts. When I was a little girl I lived in a small village in a Latin American country and I still remember US soldiers coming to the village. It was scary because they raped girls and shot people who did not like them. I used to walk around the public garden and focus on it. It helped me face my anxiety. It is a good practice and also needs disciline.

It never ceases to amaze me how and when people will bend over back wards,especially supposed liberals,to denigrate an entire country and or a entire military force ,with a supposed statement of apparent fiction.Were I to make such a generalized statement,as Frida did, about living in Latin America, and fearing the constant threats of the local drug traffickers, and the smells and sights of the local prostitutes, who just as often sold their own daughters;then I would be considered a racist, and not just another poor misfortune individual.

I’ve no idea whether Frida’s account is true, although I have no reason to doubt it. It seems unlikely she’d leave a comment on a meditation site with the specific purpose of denigrating the US military.

Incidentally, rape and sexual assault — even between members of the US armed forces — is a genuine problem. It’s not denigrating the US military to acknowledge this. It’s also not denigrating an “entire country” to acknowledge that some individuals from that country behave badly. Her statement isn’t “generalized” but specific. She’s talking about her specific experience.

And no, I doubt whether anyone would describe you as a racist for acknowledging the problems that exist in a foreign country. It would be racist if you criticized all the members of a country because of the actions of a few.

It’s laudable to be proud of and to want to defend your country, but patriotism that blinds itself to genuine problems is no longer admirable, in my opinion.

Fridas comment clearly had an ulterior motive. Saying soliders raped girls was not necessary to explain her experience that walking helped relieve her stress as a child.

That’s a strange comment, Nick. If someone has experienced a very stressful situation, then the details of that situation are very important to them. If, for example, she’d experienced post-traumatic stress because she’d escaped from a burning building, would you say that it “wasn’t necessary” for her to mention either buildings or fires in order to explain how meditation helped relieve her stress, and infer that she had some “ulterior motive”?

I’m hooked with walking meditation. As hiker I used to be walking long in the nature. Now I walk to the forest and install an slaklining and apply the same principles of walking meditation on the line.Walking round of 15 minutes or more, my atention is focused in he movement and breathing, flowing on the line. The fact is yo should be not to think in nothing, only flowing, breathing, relaxing, walking, step by step. Amaizing to see how the line stop its webbing as your breath is deep. So if you not breath properly, the line absorve this and is out of control.

[…] Put your baby in a sling and go for a walk, perhaps turn it into awalking meditation. […]

@Bodhipaksa
I want to congratulate you on how well balanced your replies to Nick B and DRAKE were. I absolutely agree with what you wrote, how you called them to focus on themselves, and how you acknowledged the alleged story of Frida, without implying it was necessary true. In fact you did not even erase any of them (including Frida’s), with superb tolerance.
_/\_

[…] Luckily I’m not the only one who things that movement can be meditation too. Check out this site for info about some moving […]

You won’t get the same benefits, but you’ll certainly get benefits. There’s a greater depth of mental stillness attainable through sitting meditation that walking can’t deliver. I’d very much recommend exploring walking meditation, but I think it’s worth persevering with sitting as well. What I’ve described here is actually more like “mindful walking,” and you might find it more beneficial to really slow the walking down, doing it indoors in a private space. I’ve been meaning for ages to write something about that form of practice…