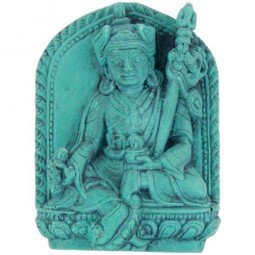 Padmasambhava was a historical teacher who is said to have converted Tibet to Buddhism. He was a renowned scholar, meditator, and magician, and his mantra suggests his rich and diverse nature.

Om is often regarded as being the primeval sound, and in fact the sound-symbol of reality itself. It represents the universal principle of enlightenment. You can read about Om in more detail on the page about the Om Shanti mantra.

Ah, in traditional explanations, is usually said to be connected with speech (more about that in a moment) but in Sanskrit “ah” is a verb meaning “to express , signify ; to call (by name).” So it suggests evoking, or calling forth, the manifestation of enlightenment.

Hum is often thought of as representing the manifestation of enlightenment in the individual human being. This may be a complete coincidence, but hum is similar to the first person singular “aham,” which means of course “I.”

Often these syllables are associated with body, speech, and mind respectively (i.e. the whole of one’s being). So there’s a suggestion that we are saluting the qualities that Padmasambhava represents with all of our hearts (and minds, and bodies).

Vajra means thunderbolt, and represents the energy of the enlightened mind. It can also mean diamond. The implication is that the diamond/thunderbolt can cut through anything. The diamond is the indestructible object, while the thunderbolt is the unstoppable force. The vajra also stands for compassion. While it may seem odd to have such a “masculine” object representing compassion, this makes sense in esoteric Buddhism because compassion is active, and therefore aligned with this masculine symbol. (The term “masculine” does not of course imply that compassion is limited to males!)

Guru, of course, means a wise teacher. It comes from a root word, garu, which means “weighty.” So you can think of the guru as one who is a weighty teacher. Padmasambhava is so highly regarded in Tibetan Buddhism that he is often referred to as the second Buddha. 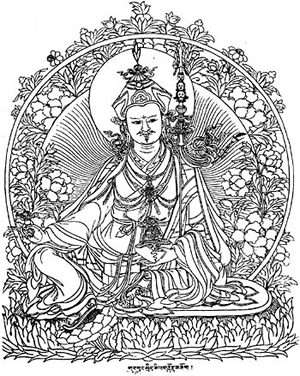 Padma means lotus, calling to mind the purity of the enlightened mind, because the lotus flower, although growing in muddy water, is completely stainless. In the same way the enlightened mind is surrounded by the greed, hatred, and delusion that is found in the world, and yet remains untouched by it. The lotus therefore represents wisdom. Again, while westerners would tend to assume that the flower represents compassion, the receptive nature of the flower gives it a “feminine” status in esoteric Buddhism, and to the lotus is aligned with the “feminine” quality of wisdom. And once again, there is no implication that wisdom is in any way limited to those who are female. The words masculine and feminine here are used in a technical sense that’s completely unrelated to biology.

And Siddhi means accomplishment or supernatural powers, suggesting the way in which those who are enlightened can act wisely, but in ways that we can’t necessarily understand. Padmasambhava is a magical figure, and in his biography there are many miracles and tussles with supernatural beings.