Closely aligned with the temple in China, the shrine in Sherman Oaks focuses on philosophy and meditation.

China’s world-famous Shaolin Temple gained prominence among many Americans with the release of the 1980s martial arts movie of the same name. An updated version of the film, loved by fans for the riveting kung fu stunts of the temple’s legendary fighting monks, is in the works. And in recent weeks, Hollywood’s remake of “The Karate Kid” has topped the box office, wowing audiences with its seemingly magical martial arts techniques.

But while kung fu continues to make a splash on the big screen, members of the Shaolin Buddhist Temple in Sherman Oaks are keen to spread a …

A Buddhist teacher travelled from Criccieth to Kathmandu to find sacred figures for her shrine room.

Now Lama Shenpen Hookham is hoping local people who are interested in meditation will visit her retreat at Ynys Graianog where the shrine room has been enlarged to accommodate more people.

“We wanted a Buddhist image in the proper proportions and covered in gold,” she explained. “Having images is important as a kind of focus for the sacred space.

“I went out to Kathmandu this winter where there are these amazing shops full of exquisite images. I chose the ones which spoke most to me.”

Pride of place goes to a statue of Guru Rinpoche, the Indian man who …

One of the most popular ambassadors of Buddhism in the West, the Dalai Lama, met with President Barack Obama in February. The meeting, which riled Chinese leaders, happened right after Tiger Woods mentioned a return to his Buddhist roots in a public apology for his extramarital affairs. Then Fox News analyst Brit Hume sparked even more discussion on Buddhism when he suggested that Woods might be better off converting to Christianity.

The national attention on Buddhism has been echoed in the establishment of new Buddhist groups and temples in the Austin area over the past decade. The faith tradition emerged in … 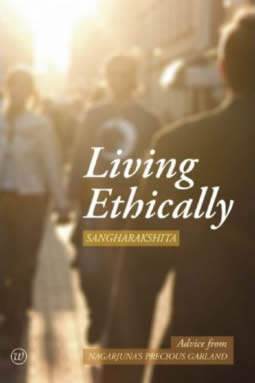 Buddhism’s ethical code was formulated in Iron-Age India. How relevant is it for people living today? Pam Dodd, our guest reviewer, delves into Sangharakshita’s book on Living Ethically.

Living Ethically is the first of two planned volumes by British Buddhist scholar and former monk Sangharakshita on Nagarjuna’s Precious Garland of Advice for a King (Ratnamala). This first book follows a beautifully laid out interpretive journey through the Precious Garland’s rich array of common and uncommon directives for leading an ethical life.

These lessons will be a welcome addition to …

Western Buddhism can be a serious business. If you travel to Newton Abbot in Devon, and then make your way a few miles further west – through the village of East Ogwell, and then the hamlet of West Ogwell – you arrive at Gaia House, one of the places in the UK where western Buddhism is being forged with impressive commitment. It’s a meditation centre. Run by volunteers, who offer a year at a time to manage the place, it hosts retreats – periods of time, running from a single day to many weeks, during which retreatants meditate.

Silence is the watchword of the house. It’s a mark of the seriousness of …

Buddhism is fastest-growing religion in English jails over past decade

Telegraph: Buddhism is the fastest-growing religion in England’s jails, with the number of followers rising eightfold over the past decade.

Although adherents to the Eastern faith believe in peace and the sanctity of life, almost all of the Buddhists behind bars in this country are serving lengthy sentences for serious crimes such as violence and sex offences.

Some jails and secure hospitals including Broadmoor have opened shrines known as Buddha Groves in their grounds, and there is a nationwide network of chaplains to cater for the growing population.

It is claimed that most of the Buddhists in jail converted after their conviction, and chose it over other religions because its emphasis on meditation helps …

Houston Chronicle: Teryl Pittman labored to settle cross-legged on a cushion on the floor. Slowly, she tucked one foot under the other and straightened her back, her eyes closed and hands joined in her lap, palms facing up.

Following the direction of a soft-spoken monk, Pittman and a handful of others swayed slightly before becoming still and settling into gentle and deep breathing.

But her discomfort grew, and 15 minutes later she moved to a bench. A little later, Diana Johns joined her.

The sight brought a smile to the Rev. Katapunna, who conducts Saturday sessions at the American Bodhi Center, which the Texas Buddhist Association opened in May near Hempstead in Waller County. 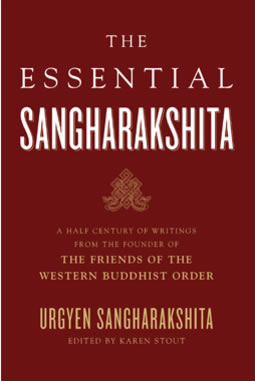 Buddhism has always adapted its presentation as it has taken root in new cultures, finding new idioms and new forms that resonate with the host culture.

For the last fifty years, Sangharakshita has been one of the teachers most involved in helping Buddhist to find expression in the west. William Harryman takes a look at Wisdom’s new survey of 50 years of teaching.

Discussing the movement of Buddhism to the West seems to be a hot topic in the Buddhist magazines, blogs, and online communities. There seems to be a lot of concern as to how Buddhism will survive the translation from Eastern culture to Western culture. Many traditional Eastern teachers, especially Theravadin, and even …

The Best of Inquiring Mind: 25 Years of Dharma, Drama, and Uncommon Insight 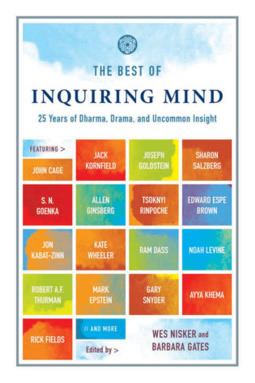 As the exceptional, essential new anthology The Best of Inquiring Mind: 25 Years of Dharma, Drama, and Uncommon Insight underscores for us, Inquiring Mind journal has been both a vital and heroic effort in English-language Buddhist media.

At a quarter-century in age, the biannual is one of the longest-standing publications for Dharma practitioners in North America—a survivor, a keeper, and an example. As publisher Alan Novidor so aptly puts it in his preface, the journal is generally regarded …

“Never Turn Away: The Buddhist Path Beyond Hope and Fear” by Rigdzin Shikpo 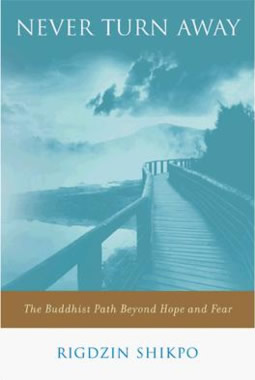 Tejananda, Buddhist practitioner, meditation teacher, and author of The Buddhist Path to Awakening, gives an overview of a new, fresh approach to translating the wisdom of Tibetan Buddhism into a western idiom.

Rigdzin Shikpo (Michael Hookham) was one of the earliest Western students of Chogyam Trungpa Rinpoche.

Trungpa, who died in 1987, was a brilliant yet controversial figure. But whatever his flaws, he was undoubtedly one of the key figures in transmitting and translating Tibetan Buddhism for the western world: not so much …