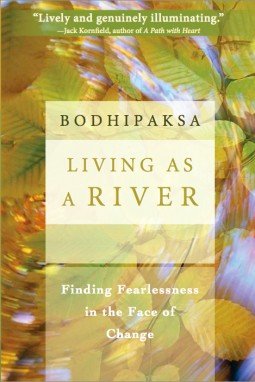 In this excerpt from the chapter on the Water Element, I discuss how water is the archetype of all change. All things flow, and we ourselves are not static and separate entities, but eddies in the stream of life.

The most striking thing about the Water Element is its quality of flowing. It’s because of this characteristic that I too think of water as being the archetype of all the other elements. The Earth Element does flow, to be sure. It flows in a literal sense, as with landslides or the movement of tectonic plates—but these movements are either rare enough that they spring to mind infrequently, or they happen on timescales that are remote from our day-to-day experience. We generally expect mountains to remain where they are and the ground beneath our feet to provide a reliable support. Fire (energy) and air also flow, but these aren’t directly visible like the flow of water. On the other hand, it’s part of my everyday experience to perceive water flowing. I see water flowing from the sky, flowing along the river that passes by my house, flowing from faucets, and flowing down drains. I hear the trickle of urine on my periodic trips to the bathroom. I can feel the blood pumping in my arteries and the saliva sloshing in my mouth. This ready familiarity means that the flow of water becomes a metaphor for the other elements that compose our bodies. As the Buddha once said: “Just as a mountain stream, coming from afar, swiftly flowing, carrying along much flotsam, will not stand still for a moment, an instant, a second, but will rush on, swirl and flow forward; even so . . . is human life like a mountain stream.”

When I meditate upon the various elements entering this human form, swirling around, and passing out again, it is in fact the image of a river that most often comes to mind. Sometimes I imagine that I’m sitting next to a six-foot stretch of river that represents my self—my body, feelings, thoughts, and memories. I sit on the bank, watching the waters flow by in this length of river that represents what is myself, me, and mine. As I watch the waters roll by I’m forced to recognize that what constitutes this “me” is forever changing. What I’ve just identified as “me” is now gone, and has been replaced. This is disconcerting, and I begin to realize more and more that I constantly grasp after a kind of self-definition and try to delimit the self, as if I fear that I will be lost in the flow of the elements. The grasping becomes more conscious, the identification more obvious. Yet as I continue to reflect on the transitory nature of the elements as they pass through my form, I realize that grasping is futile. One may as well try to hold onto flowing water as to claim the elements as one’s own, or as oneself. The moment of identification is followed so closely by the moment of dis-identification that they are essentially the same moment, and the moment of grasping becomes the moment of letting go. I find myself experiencing a sense of ease, less compelled to try to grasp the ungraspable. I begin to feel liberated.

Sometimes the image is different. I imagine that I sit before a waterfall. The sheet of water is like a cinema screen, and on it is projected a photograph or movie of my body. I can see myself, and yet there is nothing static within the image. What makes up the representation of myself, what constitutes the substance, what is apparently “contained” within the image I see of myself, is not a thing but a flow, an endlessly changing current, an ever-moving wall of water. In no two moments am I the same person, because the waterfall is not the same waterfall. As with the image of the river, the contents of the form are forever being replaced. There is an appearance of substantiality—of something static—but there is no essence. And again, sitting with this image, as I continue to observe the transitoriness of my self, I have a sense that there’s nothing to grasp. Indeed I begin to sense that there’s no one to do any grasping, since it’s my self that is void of substance.

Early in my introduction to Buddhist practice, I had an opportunity to participate in a puja, the collective chanting of some inspirational and philosophical texts. Most of what I heard went straight over my head because I found the idiom foreign and the concepts abstruse. But it was one of the more baffling texts that I also found most intriguing: a work called the Heart Sutra. The Heart Sutra is so named because it explains the core philosophical teaching of the Mahayana school: a teaching known as shunyata, or emptiness. Actually, the word “explains” is not entirely accurate because of the highly paradoxical nature of the text, which combines two different perspectives on the world in order to illuminate the self’s indefinable nature. And so we
have statements such as:

This kind of statement is in effect saying, “Look we have something we call a ‘self’ (which includes a ‘form’ or body), but when we look closely at that self we find that it lacks (or is empty of) the characteristics we assume it to have: characteristics such as permanence and separateness. The self is made up of stuff that is/was/will be ‘not self.’ And when we say it is ‘made up’ of this not-self stuff, that’s not to imply that it’s static. The not-self stuff that makes up the self is simply flowing through.” As you’ll see, it’s hard to talk about the Heart Sutra, or the teaching of emptiness, without lapsing into the same kind of paradoxical talk it employs.

The words of the Heart Sutra rattled around in my young mind (I was in my early twenties at the time, and coming toward the end of a grueling degree in veterinary medicine), both fascinating and frustrating me. To some extent I intellectually understood the teachings it summarized, but I knew that a direct appreciation of the teachings eluded me. It was as if I’d been studying the geography of France in textbooks but had never set foot on the country’s soil. Then, one day, as I was hoeing a patch of ground in the West End of Glasgow (I was spending part of my summer vacation working in a Buddhist gardening cooperative), an image appeared to me that explained the Heart Sutra in a way that went deeper than mere intellectual appreciation. I hadn’t exactly set foot in France, but it was if I’d found myself flying low over the French countryside, finally getting a clear view of it through a gap in the clouds. It was a direct experience, albeit a brief and distant one.

The image involved water. Specifically, I had an inner vision of an eddy in a river. Like many boys who had access to country streams, I’d grown up fascinated by water—the way it flows, its textures, its sounds, and the way in which it ultimately defied all my attempts with dams made of mud and stone and branches to hold back its flow.

Eddies particularly fascinated me. I was intrigued by how they held their form in the midst of constant motion, and by the fact that it was their motion that allowed that form to exist. It’s also quite astonishing that water can have a hole in it, which is essentially what an eddy is—a restless hole in the water.

An eddy never holds exactly the same form for two consecutive moments, but there is often a relative constancy of location and shape that give it, to the human mind, a sense of permanence. The kind of relatively static eddy that forms at the edge of a stream looks more or less the same over a period of time. It may change, but I have a sense that it is the same eddy. The mind in fact names this thing “the eddy,” implicitly assuming that this eddy is a “thing.” But when I look more closely, what do I see? There is no clear boundary to the eddy. Where does it stop and the river begin? It’s impossible to say.

Although I still perceive a form there, it’s a form without a boundary or, to put it paradoxically, a form without a form. Even wondering where the eddy stops and the river begins implies an assumption that the eddy and the river are in some way separate, as if the eddy could be extracted from the river. That of course is nonsense, but it’s a nonsense that in some way my mind creates by regarding “river” as one thing and “eddy” as another. Even if I edit the question to read, “Where does the eddy stop and the rest of the river begin?” there’s still a mental sense of separation that I find impossible to avoid. The fission of the concept of a river into “eddy” and “rest of the river” inevitably implies a real division. I can’t help but look for the eddy’s edge, and every time I fail.

What’s the eddy made of? Obviously it’s made of the same stuff as the rest of the river—water. But just as Heraclitus’s river isn’t the same river in two separate moments because the waters that form it have changed, so—and for the same reason—is the eddy not the same eddy in two consecutive moments. Do we then have a succession of eddies, one following another in rapid succession? If I assume this then I’m forced to ask when one eddy ends and the next begins, and I’m faced with the same situation that I encounter when I look for the eddy’s edge. I’m looking for boundaries in a situation where there is only continuity. Our imagined eddy has an apparent form, but that form, when we look for it, is elusive; the eddy is not permanent and neither does it have any separateness, even though my mind expects to find both of these characteristics.

All of this came to me, as I was gardening, in a few brief moments, rather like a bolt of lightning; and it occurred to me that the metaphor encapsulated what the Heart Sutra was expressing, and that this applied to all forms, including ourselves. I too am a kind of eddy in the flow of elements. I have an apparent form, but that form has neither permanence nor separateness. The eddy that I call myself is made up of stuff that is not-self, and that “not-self stuff” is simply flowing. When I look for the boundary between myself and the world, I can’t find one. When I look for some defining “stuff” that is in me and constitutes the essence of me, I can’t find that either, because everything is in motion. I can see my self, but I can’t pin down what it is. My self seems to be indefinable.

Excerpted with permission from Living as a River: Finding Fearlessness in the Face of Change, by Bodhipaksa (Sounds True, October 2010)