How to calm your mind, quickly and easily 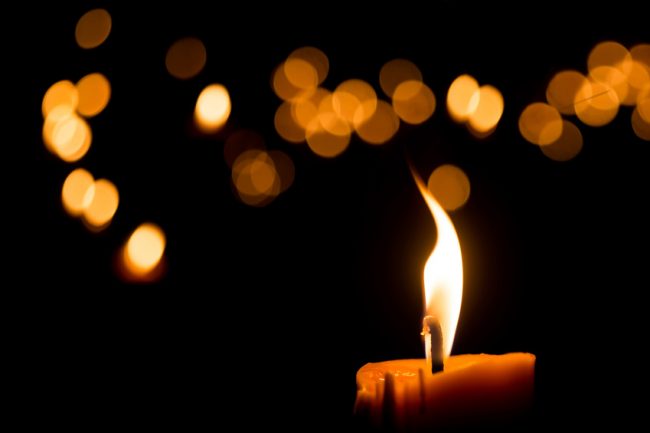 We can use our attention in two ways: either as a flashlight or as a candle.

Flashlight attention is where we have a narrow, focused beam of awareness. We observe one aspect of our experience, and because our focus is narrow, we don’t notice much else. This is how we tend to use our attention during the day. You’re almost certainly using your attention like a flashlight right now as you focus on these words. You’re mostly aware of one word flowing after another, building up a pattern of meaning in your mind. You’re probably not aware (until I mention it) of the feeling of your bottom on your seat, or your shirt touching your back, or the air flowing through your nostrils.

A candle, unlike a flashlight, throws its light in all directions. When we use our attention in this way, we allow ourselves to be aware of everything that’s arising. So we can be aware of the whole body, the breathing, sounds arising from the outside world, and so on. Our perceptions will tend to be less detailed than with the flashlight form of attention, but a candle-like awareness can bring about a sense of calmness very quickly.

This is a form of attention that very few of us have experienced. Mostly in our daily lives we shine the flashlight of our attention on one thing after another, whether we’re in conversation, working on a computer, checking social media on our phones, or eating. To compensate for this narrow field of attention, we move the focus of our awareness rapidly from one thing to another. This can be quite exhausting.

I don’t mean to imply that when we have our attention focused on one thing, that’s strictly all that we experience. But it’s approximately true. We might be thinking about something while driving, and the driving is on automatic pilot. We might we watching TV while eating, and we barely notice our food. We might be reading, and not hear our children or spouse talking to us.

Often people try to meditate using a flashlight-type awareness, so that when we’re being mindful of the breathing, we focus on just a very small part of our experience. When I ask people, during meditation, to indicate what extent of their bodies they are paying attention to, most of them indicate a small area in the center of the chest.

Now the problem is that meditating with such a small focus isn’t easy. When we notice a thought coming along, the tendency is to switch the flashlight onto the thought. Now the thought is all we notice, and we’re completely caught up in the story that was implicit in it. Then something jogs the flashlight, and we realize we’ve been distracted, so we move the flashlight beam back to the small part of the breathing that we’d been observing before. We end up doing this over and over.

The candle approach involves, first, softening the eyes. Literally let the muscles around the eyes go soft. Let your gaze rest on one spot without moving them around or focusing on anything in particular, and let yourself become aware of everything in your visual field. Become aware of sounds, smells, and anything other sensory information that’s arising from the world around you. Then begin to notice the body: everything at once, from where your body is touching the floor, right up to the crown of your head.

You can become aware of the breathing, but now instead of noticing just the center of the chest (or whatever else it is you normally focus on) you’ll notice a vast array of sensation, potentially from the whole body.

Your sense of the body won’t be as detailed as it is when you’re shining a flashlight of awareness around, examining one sensation or part of the body after another. Your impressions will be fuzzier and more general. And that’s OK. The important thing is that your experience will be richer and more interesting.

Also significant is that when thoughts arise, you’re now perceiving them as just one part of what the candle is illuminating. And because your attention isn’t focused on your thoughts, they don’t catch your attention in that way they normally do. You find that you can just let them drift through your sphere of attention like clouds through a blue sky. Thoughts don’t stop: they just stop bothering you.

This other way of paying attention is restful. You can have the sense that you’re simply resting with an awareness of what’s already there, while normally it may seem that you’re having to “work” to be aware of things. In fact the remarkable thing about the candle mode of attention is that it so quickly and easily calms the mind. People who have struggled with their meditation practice for years find that they suddenly have access to calmness. It’s a simple shift in perception, but a profoundly radical one.

Thank you for your clear and helpful writing…. this analogy is very illuminating !

This is such a great and helpful article. I love the analogy, too.. Thank you.

Brilliant as always! I find that softening the muscles around my eyes, and smiling gently has radically changed my practice. x

I do find that your thoughts presented here are helpful and worthwhile. But when trying to be in the candle mode, I find that (chronic) pain often takes over and dominates everything in my awareness until the candle is out and the flashlight is back on. Thanks for your writing.

Does anyone have any idea or better yet knows from practice whether that candle approach works for autistic people? The autistic brain is wired to be more focussed on details and single items instead of the whole picture. So, I was wondering whether candle approach would even work or if it would instead increase anxiety since even more sense information would need to be processed.

I’m afraid I can’t help you with that, Medhini. I only have experience of teaching this approach to neurotypical people.

A most excellent article. I came to the same conclusions to treat my own OCD. Focusing on details is the job of the left hemisphere of the brain (flashlight), whereas the big picture is the job of the right hemisphere (candlelight). People with OCD are usually waaaaaaaaay too left-brain “oriented”. But it’s a conditioning, not a fatality. It can be changed and this article shows how to do just that.