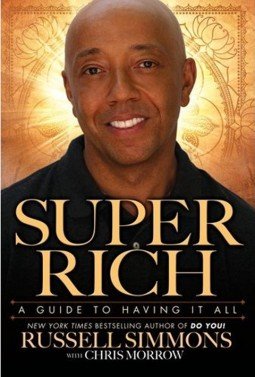 The transformation of hip-hop mogul Russell Simmons from the recreational drug-using, model-chasing manager of seminal 1980s rap artists Run-DMC, LL Cool J and Will Smith into a serene 21st-century prophet of veganism and meditation may be surreal, but it’s also quite real.

Even in his dark days of excess, Simmons had a lot of light around him. As 1990s entrepreneurs like Suge Knight made the rap business virtually synonymous with invective and violence, Simmons stood above them as a relative paragon of virtue, achieving unmatched success with humor and hustle rather than brutality. As he matured and embraced his holistic lifestyle, Simmons became “Uncle Rush,” purveyor of hip-hop brands but also philanthropist and father-figure.

Title: Super Rich: A Guide to Having It All
Author: Russell Simmons with Chris Morrow
Publisher: Gotham
ISBN: 978-1592405879
Available from: Amazon.co.uk, and Amazon.com.

Simmons takes his mentoring role seriously. In 2007, he wrote his first self-help book, a go-get-’em career primer called “Do You.” Now, he issues his follow-up, “Super Rich,” a slim, succinct and sagacious volume about the true meaning of wealth (spoiler alert: It ain’t about the money).

While Americans easily welcome advice from wealthy men, could anything be more obnoxious than a rich guy telling the aspiring masses, as Simmons does, that “there’s no difference between being broke and being a millionaire”? But Simmons knows this and spends the first passages of “Super Rich” front-loading his explanation: There’s nothing shameful in enjoying the worldly fruits of your labor, he argues. But it’s the labor, and not its fruits, that brings happiness.

This isn’t some spiritual sleight-of-hand or mystical mumbo jumbo. Simmons may be a multimillionaire, but his real love has never been the dough; it has always been his work, which in his life has always seemed more like the yogic concept of “leela,” or divine play. In “Super Rich,” the philosophy is sound – articulated in simple prose with assistance from journalist Chris Morrow, but filled with anecdotes, humor and raw language that are unmistakably Simmons’s.

Simmons reworks the “Bhagavad Gita” as if Arjuna and Lord Krishna were two guys from his neighborhood in Hollis, Queens. These moments might read like blasphemy, but they sit atop a foundation of real knowledge and practice. Simmons does more than talk: He teaches, providing meditation tools for the reader to put his concepts into action.

Hip-hop and spirituality might seem to have little in common. But like yogic philosophy, hip-hop is all about the power of vibration, the power of the word. In “Super Rich,” Simmons emerges as the first influential voice to make that connection for a new generation.

bookworld@washpost.com Charnas, author of “The Big Payback: The History of the Business of Hip-Hop,” is a certified Kundalini Yoga instructor.

Wildmind Meditation News
We comb the internet, looking for news stories related to all forms of meditation, whether Buddhist or not. To date we have posted thousands of news stories that cover everything from meditation and health to meditating celebrities. When we publish a story that's favorable to or critical of one form of meditation, this does not imply that we agree with the stance of the original news story.
celebrities, generosity, giving, meditation at work, meditation books, money, wealth