How to get out of your own way 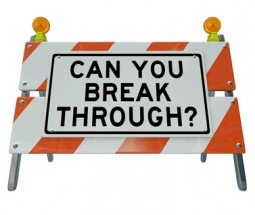 I used to write regularly for this blog. Pretty much every month, for years. But then last summer I went through a major house move that totally disrupted my life and brought my writing to a halt.

But that’s really just an excuse. I’ll admit it’s inertia and my inner critic that’s getting in my way now. Despite my wanting to do it, I’ve always found it hard to write. And when I fell off my routine, and weeks and months passed, it just got harder and harder to get restarted.

I’m wondering if this sounds familiar to any of you out there. When it feels like YOU are the main thing getting in your way?

I wish I could say there’s a surefire way out of this, but of course there isn’t. As I slowly nudge myself back, I thought I’d share some of the strategies I’m pursuing.

My main approach is to think in terms of planting small seeds of change. The forces of inertia and my inner critic are too overwhelmingly powerful to confront directly. They’re way bigger than me. It’s futile to struggle against them.

But I can mindfully step back, take a breath – and in each moment of awareness, choose to do one very small thing differently than I have before.

So, when my inner critic tells me that last sentence is awful, I don’t have to delete or rewrite it immediately. A friend of mine says she responds to her critic by saying, “Thank you for sharing!” At the very least, I don’t have to fall hook, line, and sinker for the babble my mind is coming up with. Even if I still think that sentence isn’t very good, I can leave it there and at least allow for the possibility that it’s useful in some way. That’s one step in a new direction.

Another strategy is to respect and work with the natural processes of the brain – specifically, its capacity for productivity and willpower. A recent New York Times article cited research that the brain is productive for about 90 minutes at a time. And to sustain productivity, it’s best to rest – take a nap, take a break, or go meditate. So I’ve stopped making myself sit for hours trying to produce something. I now get up, and at least stretch and walk around every hour and a half.

I think this is the same basic idea that Daniel Goleman writes about in an article about building willpower. He says we each have a fixed budget of willpower. If we keep pushing hard on one thing, we’ll have nothing left to face whatever comes next. And that leaves a perfect opening for my inertia and inner critic to step in and mess me up again.

On the flip side, Goleman says that being disciplined in small doses on a regular basis does help to strengthen the willpower muscle. It gets easier to do that thing as time goes on. So I take heart in the knowledge that writing in small doses regularly will help me get back into a routine.

I know it will take some time before things feel like I’m back on track. And I suspect there will be a few stumbles and backward steps along the way. Above all else, I’m being careful always to stay kind to myself. No beating myself up, no unrealistic expectations.

I’m just going to point myself forward and know that I’m doing the best I can. And I’ll keep the faith that over time, many small seeds of change can grow into a forest.

What about you? What are your strategies for getting out of your own way? I’d like to hear from you.

Sunada Takagi
Sunada Takagi is on a mission to help people transform their lives through mindfulness. Her work includes leading classes in Mindfulness-Based Stress Reduction in the Boston area, and coaching individual clients from anywhere in the world via videoconference or phone. Read more at her site, Mindful Purpose Coaching. Sunada also teaches and leads retreats at the Boston Triratna Buddhist Sangha and Aryaloka Buddhist Center. Sunada was ordained into the Triratna Buddhist Order in 2004. This is where she received her name, which means "beautiful, excellent sounding." You can follow her at her Mindful Living Blog as well as on Facebook.
meditation and neuroplasticity, motivation, personal growth, procrastination